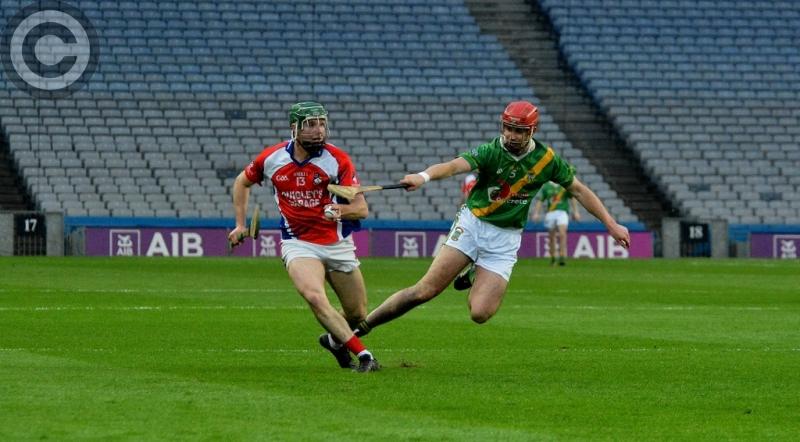 Carrickshock waited a long time for a day of deliverance like this.
When it came it arrived with a grand splash and when the sun eventually began to set on it they must have felt they had enjoyed all their birthdays together.
The Kilkenny champions simply walked away with this All-Ireland club intermediate hurling championship final as they totally out-classed Ahascragh Fohenagh (Galway).
It turned out to be a stroll in the 'Park, none other than magnificent Croke Park by the way, on an early Spring afternoon on Saturday when the 'Shock finally buried the pain of losing the final of 2005.
This was a top class effort from the South Kilkenny outfit.
They caught hold of the game from the off, when former county star, Richie Power, threw over a pair of points, one from play, the second from a huge free, to make a bold statement of intent.
Business done
On the team rolled. It was business done as early as the 33rd minute when Damien Walsh crashed home Carrickshock's second goal to give them an unassailable lead of 2-6 to 0-3.
So comfortable were the 'Shock heading towards the final stretch that early in the last quarter team captain, John Tennyson, called to the sideline to "empty the bench".
It was duly emptied, and one of the club's long time servants, Pat Tennyson got to enjoy a very special moment in his career when he shot a beautiful point from all of 80 metres.
Carrickshock's day
Yes, it was Carrichshock's day without a shadow of a doubt.
They almost went the full closing half without shooting a wide. They put a black mark on the run when registering a wide in the 62nd minute.
That was lost against a scoring take of 1-9, however.
"We were due a day like this," insisted thrilled team captain, John Tennyson.
"We have suffered in finals and we felt the pain of relegation, but this went better than we could ever have imagined."
Every warrior answered the call!
Richie Power somehow gets movement into a crocked left knee surgeons have written off, and what a force he can be within the unit.
He caused havoc at centre-forward, moving with more purpose than freedom, and his take of six points (five from play) was simply outstanding in the circumstances.
All their big men, Tennyson and John Dalton in the heart of the defence; Michael Rice in midfield, led from the front, and wing-back, Niall Tennyson was right up there with the best of them, ripping into tackles, clearing his lines with authority.
The honours rolled on - John Power had some delightful moments too, while young Kevin Farrell, David Franks and John Cahill hit the high spots too.
Barely 23 seconds had passed when Richie Power swept over a point at the Canal End.
Before the second minute had been reached a crude foul on Niall Tennyson offered the same Power a chance from a free from beyond midfield, which he mopped up.
Farrell scores
The next point was registered by regular free taker, Kevin Farrell, punishing a foul on Darragh Brennan. And on six minute John Cahill put John Power in space to shoot and send the white flying.
We noted seven minutes had passed. The 'Shock had registered four times. They added three wides as well, all without a serious response from Ahascragh.
The one way scoring traffic continued.
Farrell registered again after Mark O'Dwyer was pulled and dragged in a no danger situation. Their sixth point in the 16th minute was an outstanding example of hurling made simple.
Goalie Jamie Power belted a long puck-out down field. Kevin Farrell claimed the ball from the sky.
He popped a short pass to Damien Walsh. Point. No fuss. No bother.
Score: 0-6 to 0-0. 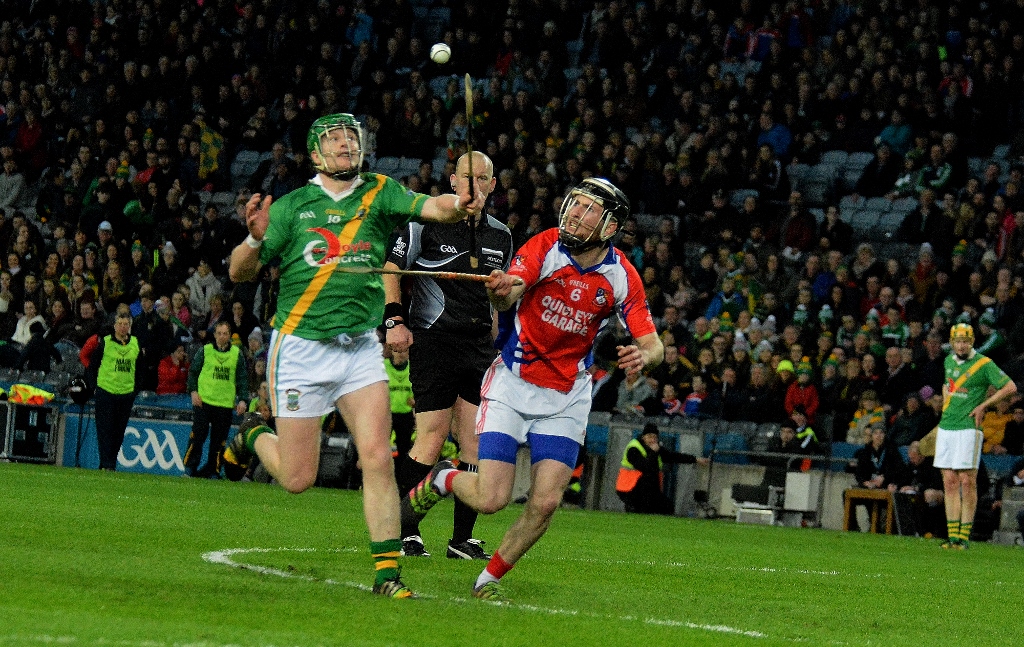 Ahascragh were made wait until 19.55 showed on the clock to open their account. They did so via Cathal Mannion, after Pádraic Mannion powered a long free out of defence.
There was trouble ahead, however.
On 22 minutes Richie Power pilfered possession from between the feet of a clutch of players to the left of goal, near the 20 metre line. He rolled out around the pack and was bearing down on goal when he was dragged to the ground.
Penalty. Goalie Jamie Power made the long journey up field. He placed the ball back a metre or so from the free line, and after a lift and run, crashed a whistling shot into the bottom right corner of the net.
That strike carried Carrickshock into a strong half-time lad of 1-6 to 0-2.
The second half action opened with Cathal Mannion shooting a point from a free for the Galway champions.
Again there was trouble ahead for them, serious trouble this time.
Richie Power won a ball on the '50' and threw a hand-pass back down field to Brian O'Donovan. The latter's quick hit delivered the ball into a gap in the centre close to the 20 metre line.
Defence dithered
As defence and goalie dithered, Damien Walsh swept in from the right wing. He was first to the sliotar.
Walsh steered the ball along the ground, round the advancing 'keeper, and into the empty net.
Game over. Score 2-6 to 0-3.
Within 90 seconds Rice and John Tennyson dug out good possession, and when Richie Power was given the ball, he pointed.
There was a reply from Ahascragh through Luke Cosgrove, but that was replied to by John Power, a top class score from 25 metres on the right sideline.
By the end of the quarter the gap had stretched to 2-11 to 0-5 after Richie Power made another scoring deposit.
From there Carrickshock freewheeled to victory. It was their day, no doubt!
SCORERS: Carrickshock - Richie Power (0-6, one free); Damien Walsh (1-1); Jamie Power (1-0, penalty); John Power (0-2); Kevin Farrell (0-2, frees); Michael Rice, Darragh Brennan, Mark O'Dwyer, Pat Tennyson (0-1 each). Ahascragh Fohenagh - Cathal Mannion (0-5, three frees); Luke Cosgrove (0-1).
Carrickshock - Jamie Power; David Franks, John Dalton, James Grace; John Cahill, John Tennyson, Niall Tennyson; Brian O'Donovan, Michael Rice; John Power, Richard Power, Damien Walsh; Kevin Farrell, Darragh Brennan, Mark O'Dwyer. Subs - John Butler for O'Donovan; Shane Power for D. Brennan; Pat Tennyson for J. Cahill; Michael Rohan for M. O'Dwyer; John Murphy for J. Grace.
Ahascragh Fohenagh - Donal Kelly; Brian Kilroy, John Kelly, Paul Gavin; J.P. Egan, Pádraic Mannion, John Finnerty; Stephen Kelly, Laurence Tully; Luke Cosgrove, Eoghain Delaney, Finbarr Donnellan; Cathal Mannion, Ronan Kelly, Mark Kelly. Subs - Shane Connelly for F. Donnellan; Eoin O Ceallaigh for M. Kelly; Cathal Cosgrove for E. Delaney; S. Smyth for R. Kelly.
Referee - Gearoid McGrath (Wexford).
Attendance - 6,524.