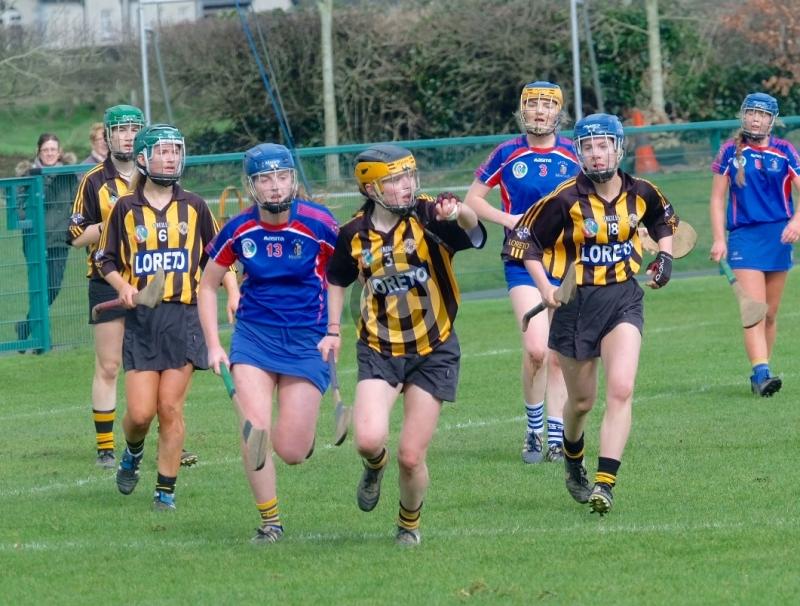 Ciara O'Shea (3), supported by Michelle Teehan (6) and Aisling Maher (18) have this situation under control for the Loreto in today's All-Ireland final. Photo: Pat Moore

The Loreto Secondary School, Kilkenny turned in an absolutely super diplay when thrashing talented Ursuline Secondary School, Thurles to win their fifth All-Ireland post primary schools senior 'A' camogie final today.
The Kilkenny girls hit the ground running at the excellently turned out grounds at Conahy when they scored four points without reply during the opening nine minutes. Sophie O'Dwyer, Eimear Keoghan, Hannah Kelly and Dwyer again all hit the target as the Loreto found their stride early.
From there on the superb combination play, clever use of possession and deadly finishing were all serious factors as the winners crushed game Ursuline, who were in deep, deep trouble at half-time when 0-3 to 3-11 behind.
Already match star, Hannah Kelly had bagged 1-4 for the winners, the goal coming from a penalty in the 30th minute after Aoife O'Carroll had been fouled. Keoghan (22nd minute) and Aoife O'Carroll (27th minute) also got in on the goal scoring act.
There was no respite for Ursuline after the turn. O'Carroll and Keoghan tacked on early points before Sophie O'Dwyer was fouled and the Loreto were awarded a second penalty. Kelly drilled the ball into the net to extend the divide to 4-14 to 0-3.
It was all over!
How good were the Loreto?
"That was as good a performance as we will see next September," suggested Leinster delegate to the Central Council, Hether Breslin when presenting the cup to winning captain, Niamh Deely.
SCORERS: Loreto SS - Hannah Kelly (3-5, two goals penalties); Sophie O'Dwyer (1-4, point free, one 45); Aoife O'Carroll, Eimear Keoghan (1-3 each); Caoimhe Dowling (0-1, free); Steffi Fitzgerald, Katie Brennan, Rachel Kelly (0-1 each). Ursuline SS - Eimear McGrath (1-3, all frees); Eimear Loughman (0-1).