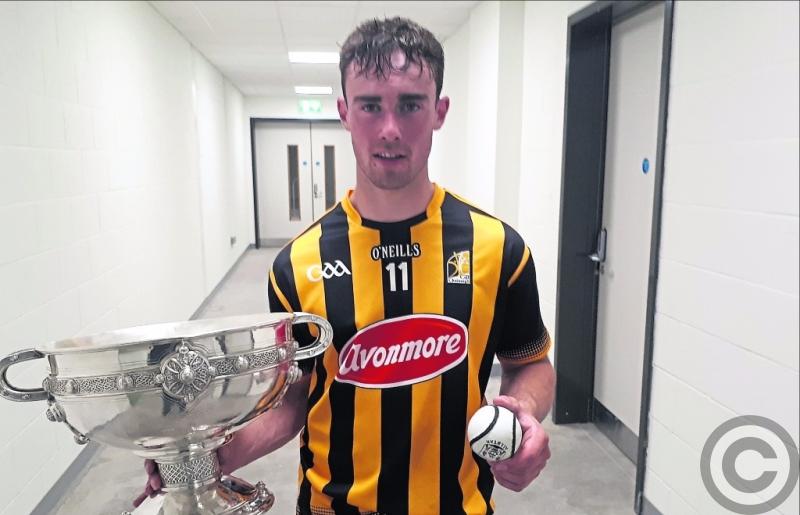 Kilkenny captain, Darragh Brennan with the winners trophy and the match ball.

A brilliant six minute spell during the second half when they turned a three point deficit into a three point lead when playing against the breeze was game deciding when Kilkenny stormed to their fifth All-Ireland intermediate hurling championship victory in Pairc Ui Chaoimh today.

Cork, a fair team, looked really threatening when free taker Sean Hayes threw over a point in the 43rd minute to shoot them 1-15 to 0-15 ahead, which was only the second time the gap was so wide up to that.

The Kilkenny fightback was launched by Paul Holden when he flashed over a super point from the right wing. Within a minute specialist sideline ‘cut’ taker, Edmond Delaney shot a quick ball to Martin Keoghan, who then hit the target from close range.

On the Cats roared. After corner-back, Niall Doherty drew a foul on the opposing ‘40’ Robbie Donnelly popped over the equalising score from a free. Suddenly the hard chasing visitors were full of running and they were all over the opposition.

On the winners charged. In the 49th minute they plundered the lead goal. Martin Power raided from the left at the town end, and when his shot was saved by goalie, Patrick Collins, the ball broke loose to team captain, Darren Brennan, who was tripped.

Penalty! Top scorer Robbie Donnelly blasted to the net to fire Kilkenny 1-18 to 1-15 ahead; a turn around of six points in a mere six minutes.

The Cats grew stronger and stronger as the game wore on, and with the help of a second goal from sub Tom Phelan in the 53rd minute they raced a commanding 2-19 to 1-15 in front, and victory was within sight.

The winners charged all the way to the finish to claim a famous victory with Niall Doherty the man of the match at corner-back, while Martin Keoghan, Edmond Delaney, Robbie Donnelly, Paul Holden and John Cahill were also star performers.

Kilkenny had first use of the breeze that varied in terms of strength. Eight times the scores were level during the opening period. The winners led at the break by 0-11 to 0-10, Donnelly shooting the dividing point from a free following a foul on Sean Carey.