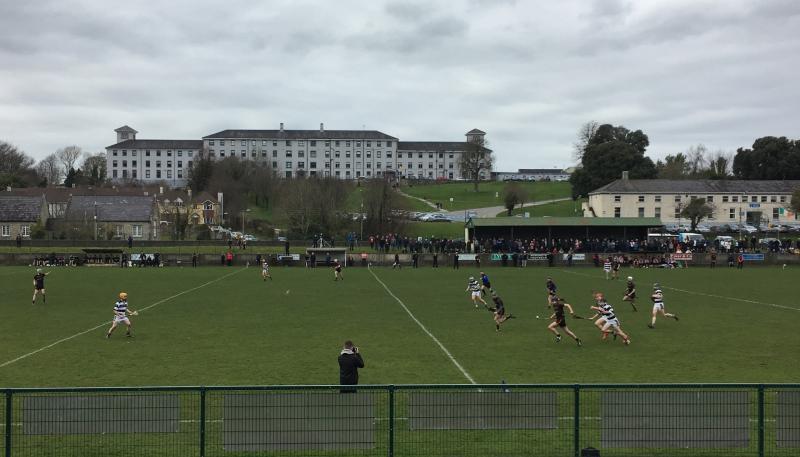 Composure and the ability to get scores at crucial times proved to be a winning combination as the senior hurlers from St Kieran’s College charged their way into the Croke Cup final.
The Saints earned a shot at a 22nd All-Ireland title when they saw off a spirited Ardscoil Ris in Clonmel. The Munster champions came into the game as favourites but could never get in front as Kieran’s kept a tight grip on proceedings.
With less than 20 minutes left the Limerick side were five points down (0-13 to 0-8) but cut the gap when Rian Considine broke through for a goal. Spurred on by this they fought hard and drew level by the 50th minute, but Tom Hogan’s side had the confidence to kick on again. Conor Kelly and Adrian Mullen led the charge, scoring three points that pushed the College into a lead they would not lose.
Kieran’s were the better side in a quiet first half. After an even opening quarter they had a chance to take a big lead when Conor Kelly bore down on goal but Ardscoil netminder Jason Gillane made a fine save to keep his side in the game.
The Kilkenny side upped the pace after that, with Adrian Mullen (0-2), Eoin O’Shea and Ciaran Brennan getting the scores that helped them go in 0-8 to 0-6 ahead at half-time.
With the wind at their backs Kieran’s were sharp out of the blocks in the second half. A quick burst of scores from Kelly (0-3), Mullen and O’Shea saw them strengthen their lead. Things got nervy after Ardscoil’s rally, but the Saints regrouped - now they’ll march on to the All-Ireland final in Semple Stadium on March 31.
SCORERS: St Kieran’s College - Adrian Mullen (0-8, 0-5 frees, 0-2 65); Eoin O’Shea (0-4); Conor Kelly (0-3, 0-1 free); Eoin Cody (0-1, line ball); Daithi Barron, David O’Carroll, Ciaran Brennan (0-1 each). Ardscoil Ris - Paul O’Brien (0-7, 0-5 frees, 0-2 65); Rian Considine (1-0); Diarmuid Ryan (0-3); Aidan Moriarty (0-2); Cathal O’Neill, Rory Duff (0-1 each).