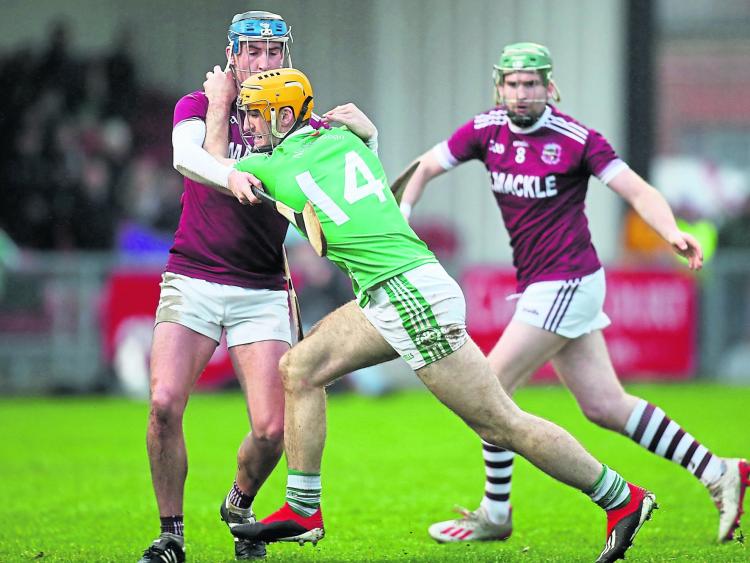 The power and direct running of Colin Fennelly is a key component in the Shamrocks attack PICTURE: McIlwaine Media

The real wonder is that it has taken this long to reach this point where we have a Kilkenny versus Tipperary final.

Five months after the counties grappled for the MacCarthy Cup, their finest club teams, Shamrocks from Kilkenny and Borris-Ileigh from Tipperary, will take over Croke Park for the All-Ireland club senior hurling championship final on Sunday.

The history of the competition runs back nearly 50 years to 1970-71 when Tipperary’s then finest, Roscrea beat St Rynagh’s of Offaly in the first decider.

Yet, it has taken this long to get Kilkenny and Tipperary clubs into the arena together.

Now after two sizzling semi-finals in which Borris-Ileigh beat St Thomas (Galway) and Shamrocks saw off Slaughtneil (Derry), the scene is set for another exciting chapter to be added to what is possibly the keenest rivalry in hurling.

The bookies have a clear picture of how it will all pan out as Shamrocks chase their eight title, and first back-to-back wins. Shamrocks are 1-4 on to win, with Borris-Ileagh quoted at 11-4 to deny the Cats another piece of history.

Madness, some would scream, in a two horse race with so many variables.

Shamrocks manager, Henry Shefflin, is aware of the dangers of such things. He sees Borris-Ileigh, club and parish, on a journey powered by serious talent on the one hand and deep emotion on the other.

A deadly combination, as Shamrocks know from their own experiences in recent years.

“The blend between the older and younger players, plus their inter-county players, is really good and they are performing at a phenomenal level,” was Shefflin’s view of the opposition after taking in the wonders of the recent semi-final win over St Thomas, including a point in a million from Brendan Maher, scored with half a hurley.

“That is what we had last year. The momentum then of the Ryans’ and McCormacks’ playing so well around Brendan Maher and Dan McCormack is something. There is a huge story here about Borris Ileigh and the journey they are on.

“There is a great connection between club and community. It is a serious hurling area. That is the brilliant part of the GAA club championships. We are all facing teams similar to ourselves. That is the beauty of this competition.”

While the manner of Shamrocks 2-24 to 2-19 semi-final victory over Slaughtneil was heart-warming after a thundering finish, Shefflin, on reflection, insisted there was serious room for improvement.

The character shown by the players pleased him and selectors, Richie O’Neill, Patrick Phelan and Tommy Shefflin no end, but elements of the performance fell short of requirements.

“It was the character shown by the players that pleased most,” the 10 times All-Ireland medal winner insisted.

“Every time we pulled ahead Slaughtneil got an amazing score, obviously Brendan Rodgers goal near the end, to get back into it.

“In the closing 10 minutes when Slaughtneil were flying, Eoin Reid came down the field, grabbed a puck-out and gave it back to Evan (Shefflin), a point.

Things like that I would be mighty proud of, that the players didn’t buckle under pressure.

“That was the most pleasing thing. There were aspects of the game that were sloppy that we didn’t maybe compete as well as we could have, absolutely.

“Was there a lot of learning to be done? Was there room for improvement? Absolutely. When you look back on the match some players were at peak level in terms of performance and others were not. We have to try and sort that out.”

He insisted Shamrocks were in a very fortunate position, chasing another All-Ireland title.

“We have to try and make the best of the opportunities that arise, prepare properly but as well as that, look forward to the occasion with enthusiasm. It is Croke Park. It is All-Ireland final day.”

Shamrocks reckon they can be sharper. Although they had a very useful work-out against Kilkenny before Christmas, the break for the festivities, although only a few days long, broke up the momentum they had going.

“Some players will have been disappointed, not happy after the semi-final,” the manager felt. “That is a mature attitude. I do get the sense we know we will have to improve. That is the challenge. That is the goal we set ourselves.

“Each step you take on a journey like this things get harder. Now it is the final. This is the hardest test of all. We are going to Croke Park to face a team with serious momentum. The challenge is huge.”

If Borris-Ileigh manager, Johnny Kelly, has received great praise for turning the fortunes of the club around and guiding it to its first Tipp title in 33 years and everything else beyond that, the shrewdness shown by Shamrocks on the line has to be greatly admired too.

“We are all in good form, and we are looking forward to the final,” Shefflin said of the mood in the camp. “We know we have work to do, but we have absolute belief in the talent we have.”

Brendan Maher and Dan McCormack, who likes to drift deep from midfield and play as a kind of covering centre-back, have been the big, big performers for Borris-Ileigh, but the tenacity and consistency of the support from such as Conor Kenny, Sean and Ray McCormack, Paddy Stapleton and so on has been massive too.

TJ Reid, Colin Fennelly, who was immense in the semi-final, Joey Holden, Michael Fennelly, the Mullens’, Darren and Adrian, along with Evan Shefflin have been hitting the high notes in terms of performance for the Kilkenny champs.

Shamrocks know the story. For all its exciting plays and the thrill of the tight finish in the semi-final, that level of performance won’t suffice in Croke Park.

The players have travelled a serious journey to get to where no other Shamrocks group has gone before. Now they need to crown their efforts!

The players chasing glory and how they got to the final:

The Twos Club
Five clubs put wins back-to-back in the All-Ireland senior club hurling championship.
They were Birr in 2002 and 2003; Galway pair Athenry in 2000 and 2001 and Sarsfields in 1993 and 1994 and former Dublin champs, Cuala in 2017 and 2018.
Although they head the Roll of Honours, Shamrocks have never put victories back to back.

Borris-Ileigh Path To The Final