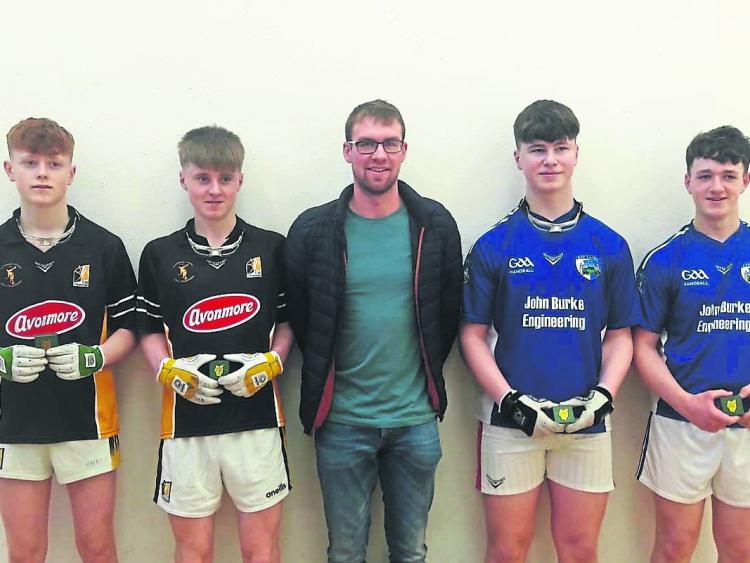 Played in O’Loughlin’s, Kilfane and Windgap, the finals were well supported and produced top class fare by the future stars, and there was plenty for Kilkenny to celebrate afterwards.

The county won a staggering 14 titles, equally split between boys and girls. All players in grades from under-14 upwards will now contest the All-Ireland semi-finals against Connacht on the weekend of March 7/8.

Now that the Leinster adult Four Wall Singles championships are almost completed, a number of Kilkenny players can look forward to the All-Ireland semi-finals in two weeks time, also against Connacht.

Due to be played on the same weekend as the juvenile matches, Billy Drennan (Galmoy) in minor singles, Noelle Dowling (Mothel) in ladies minor singles, Brian Mahon (Clogh) in junior singles and Anthony Martin (Kells) in over 35B singles can look forward to the All-Ireland series.

In the men’s intermediate singles provincial final, Shane Dunne (Clogh) plays Kildare opposition this Friday on his return from the US Collegiate championships.

On Saturday the O’Neill’s All-Ireland Four Wall senior singles championship commenced with Kells brothers, Patrick and Peter Funchion leading the local charge. With the last 32 matches on Saturday, and another round played on Sunday, there were mixed fortunes for the Kilkenny brothers.

In his first contest Peter (ranked 10) scored a comfortable 21-3, 21-9 win over Colm Jordan (Westmeath). He followed with another fine victory on Sunday against Ger Connan (Tipperary) 21-7, 21-4 to advance to the last eight this weekend.