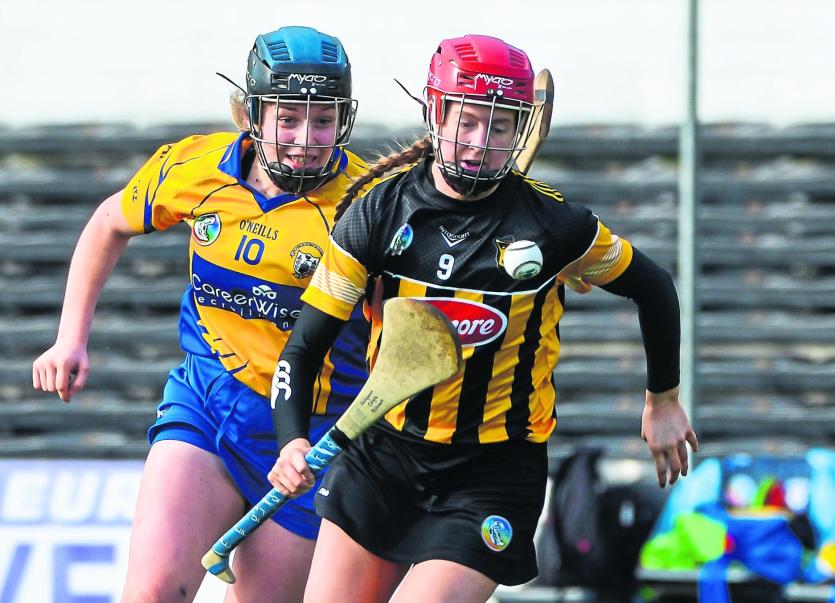 Improving Clare claimed their second win in as many matches, but Kilkenny felt the cold chill of defeat in their first game when losing this lively Littlewoods Ireland senior camogie league clash in UPMC Nowlan Park.

The Cats will be in action again on Saturday when they face Offaly at home. Clare beat the midlanders in their opening tie, so the Cats will be hoping to bounce back.

“We were disappointed,” was the simple response from Kilkenny manager, Brian Dowling, after Sunday’s defeat.

“You want to be winning your home games. We made mistakes and we paid for them.”

“We didn’t take our chances,” Mr Dowling went on.

“We were on top in the second half until Clare scored the only goal of the game. It was against the run of play, but while we were threatening, we weren’t scoring.”

On top of the misses, Kilkenny had a first half penalty goal scrubbed when the free taker, Denise Gaule, apparently broke the ‘20’ metre line when striking the ball.

“During the League we will give new girls a chance and try things. It won’t be plain sailing.

“We have a huge amount to improve on, but it is only our first game, it is only February. I know the girls will work hard,” Mr Dowling added.

Over the next three weekends the Cats will face Offaly, Cork and Waterford.

“By the end of that run we will know an awful lot more about ourselves,” the manager felt.

“That is what the League is about, trial and error and trying to get a team together. Only one team will go through from the group, so the League might be gone on us already.

“We will take the matches as they come and give new talent a chance as we build for the championship,” he explained.

In the final analysis, that 47th minute goal for Clare referred to was the clincher. It was scored by Áine O’Loughlin.

The goal halted Kilkenny in their tracks just after good shooters Danielle Morrissey and Denise Gaule had pointed consecutive frees to give the home side a bit of momentum (0-6 to 0-5).

Marie McGrath drilled in a direct ball from out the field. After the ’keeper looked to have the situation covered, Áine O’Loughlin stole possession and shot Clare 1-6 to 0-5 in front.

When the excellent Eimear Kelly boosted the advantage by converting a free, Kilkenny looked in trouble.

To be fair to the losers, they took up the chase with real spirit, Morrissey (2) and Kelllyann Doyle pulling back points to leave the minimum between the sides with the 59th minute dawning.

Clare finished with late points from the excellent Gretta Hickey, a powerful stroke from 50 metres, and star performer, Eimear Kelly to claim a victory that meant an awful lot to them.

During the first half fans saw two goals disallowed. The first was from a penalty by Gaule, which was awarded after Miriam Walsh had been fouled.

The second was a Clare effort after a long range shot from the right wing by Maire McGrath saw the sliotar end up in the Kilkenny net. That was scrubbed because a player encroached on the square, apparently.

Generally the action was close, and the tackling was fairly hot as both sides tore into it. Early on Clare’s lone scorer during the half, Eimear Kelly shot a point but that was replied to by Katie Nolan in the seventh minute following a good run by Colette Dormer.

The home side got in front in the 12th minute when Michaela Kenneally picked up a stray pass by a Clare defender before shooting over the bar (0-2 to 0-1).

Few scores were surrendered by the tight defences during this half. At half-time Clare led by 0-4 to 0-2, with Eimear Kelly their lone scorer.

There was much more vigour about Kilkenny at the start of the second half. Only seconds into the half they put a smashing move together which ended with speedy centre-forward, Aoife Doyle, getting a run at goal, but she couldn’t finish.

The Cats followed up by scoring two points, but following the concession of the goal to O’Loughlin they were always chasing afterwards.

They came up just short at the finish despite the excellence of Denis Gaule all over the field, Claire Phelan, who was a mighty leader in the heart of the defence, Michelle Teehan, the direct running Aoife Doyle, and Miriam Walsh, who looks a possible mischief maker for many a defence.