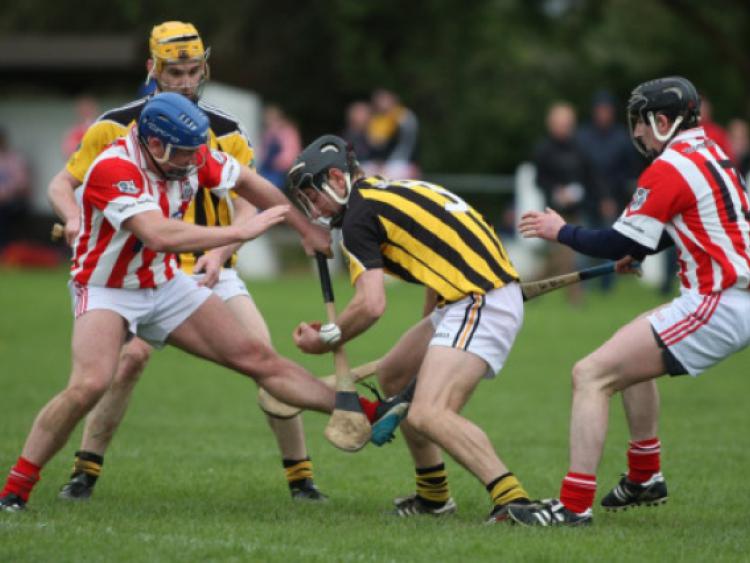 In the mood Tullogher-Rosbercon caught hold of the game in the first quarter and they never relaxed their grip when scoring a good win over disappointing Young Irelands (Gowran) in the intermediate hurling league.

In the mood Tullogher-Rosbercon caught hold of the game in the first quarter and they never relaxed their grip when scoring a good win over disappointing Young Irelands (Gowran) in the intermediate hurling league.

A largely cross field wind ripped across the Tom Walsh Park pitch and made shooting difficult, which hurt ’Irelands in particular as they registered 13 wides.

The opening six scores were equally divided. Cian O’Donaghue opened the scoring by shooting a brace of points for the winners.

They were answered by two efforts from Cathal Kehoe during the opening eight minutes to suggest a good contest was on the cards.

However, the early promise changed dramatically after Tullogher goaled in the 14th minute. They simply took over after that and dominated opponents who were strangely subdued and fell far short of their own expectations.

Walter Walsh put his name on the big score to send Tullogher spirits soaring. The ball was moved quickly and efficiently by four players before it arrived at the county star, who soloed through two weak tackles before shooting to the net (1-3 to 0-3).

Tullogher were up and running, and they kept up the high tempo efforts from there to the finish. The winners delighted team handlers with their attitude and assured way they kept up the good effort from start to finish.

Pat Hartley was outstanding for the winners, and his energetic and clever hurling directed operations with real force from the back. Hartley was flanked by two good wing men and the losers won little or no ball on the opposing ‘40’.

John Hartley was another strong performer in the winners defence, while further afield Walter Walsh was simply great while John Barron and Conor Hennessy got through a lot of good hurling also.

Three unanswered points by Cian O’Donaghue (free), Conor Hennessy, a very fine effort indeed, and O’Donaghue again left ’Irelands in a bit of trouble when 0-3 to 1-6 down at the break. The losers were strangely listless, and there was no great change afterwards.

The pattern of the exchanges remained unchanged after the turn around. Tullogher resumed the scoring with points from John Barron, Walter Walsh, with a mighty effort from 60 metres, O’Donaghue at the double and Walsh again to race 1-11 to 0-3 clear.

The one-way scoring trend was halted in the 49th minute when Paul Holden picked off a point from a free for demoralised Young Irelands. That effort from Holden brought to an end a smashing run of 1-8 by the winners, which highlighted the difference between the sides on the day.

’Irelands just couldn’t halt the flow of scores, and they suffered.

Dick Carroll and Pat Hartley swopped points as ’Irelands tried desperately to gain respectability, but there was no great purpose to their efforts.

Tullogher kept up their strong effort right to the finish. Conor Hennessy added a great second goal in the 56th minute to drive them 2-12 to 0-6 clear.

There was no respite for the losers, who conceded the next point to Conor Hennessy to conclude the winners total.

Young Irelands put in a bit of a burst at the finish and picked off points through Paul Holden, Dick Carroll and Holden again, but really, the game had long gone on them by that stage.

Full-back Michael Walsh stood firm in a losers defence that was very unsure. His hurling was really good. The best of the support came from the hard trying Chris Nolan, Paul Holden and Dick Carroll. ’Irelands officials were very disappointed afterwards, because training ground form had suggest there was more, much more in the team.