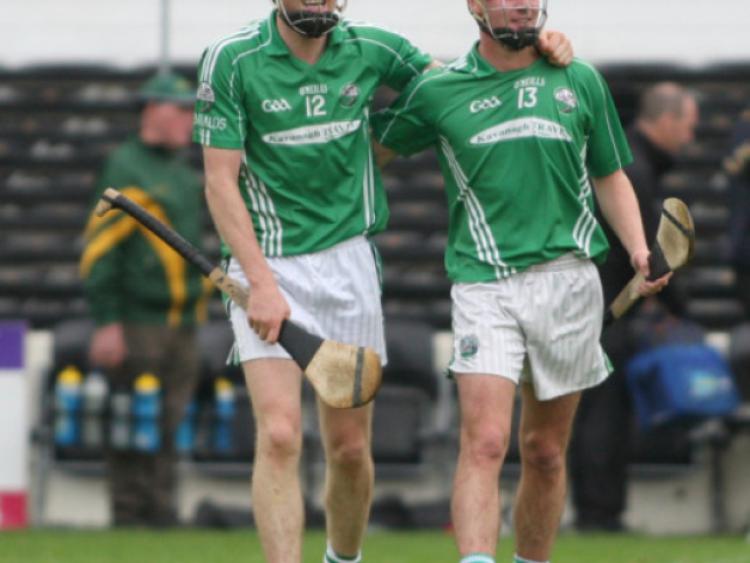 They knocked a giant in the quarter-finals. And they felled another giant in the semi-finals on Sunday. These Emeralds are sparkling!

They knocked a giant in the quarter-finals. And they felled another giant in the semi-finals on Sunday. These Emeralds are sparkling!

Gutsy, defiant Emeralds (Urlingford) will tread new ground in Nowlan Park on Sunday week when they contest their first Kilkenny intermediate hurling final. The opposition will be provided by the Rower-Inistioge.

Emeralds booked what they hope will be a memorable day out by cutting down senior side of last season, Dunnamaggin, in a battling semi-final in Nowlan Park. The fare varied from the ordinary in the first half to gripping at the finish, but when it all mattered in the final straight Emeralds showed absolute defiance and serious class.

What they did, if you like, was hold the best wine until last. With eight minutes to go Dunnamaggin were in a great position. They had claimed the last three points, and were right on their opponents shoulder, 1-14 to 2-10.

They missed a chance to draw level before the men who saw off the hotly fancied St Lachtain’s (Freshford) in the last round bared their teeth.

Dunnamaggin were stopped dead in their track, held without a score from there to the end. Emeralds matched fire with fire and dug deep to produce a fantastic finish. That bright young talent, Conor Martin, worked two good openings before shooting a pair of invaluable points, one from either side of the field.

The Emeralds charge into the final roared on. After Dunnamaggin squandered their last chance to halt the slide, lively sub Joey Kavanagh ran on to a great delivery from Padraigh Phelan before shooting between the posts. And for good measure, the wonderful Aidan Fogarty popped over an easy point from a free in lost time to sign and seal a great victory.

Fogarty clocked out with 1-8 marked behind his name. The goal was a beauty; a wonder to the eye as he jumped into the air to gathered an angled drive from the left of midfield by Padraig Phelan before cutting through the Dunna’s defence to crash an upstoppable shot to the net. That was the highest point of his afternoon of high achievement.

His former Kilkenny colleague, Derek Lyng, who wasn’t listed on the starting XV because of doubts over his fitness, was another massive performer. His constant power plays and repeated surging runs made him the ‘engine’ of the team, if you get the drift. As team leaders the pair couldn’t have given another thing!

“That was a great win,” insisted thrilled Emeralds club chairman, Jimmy Tone. “We were the underdogs, which was a help. We are delighted. The players showed fierce character when Dunnamaggin got to within a point of us nearing the finish.

“We know there is character in the team. Today the players really showed how much character they have. This win is a great lift for the club and parish. We know there is huge ability in this team. We are looking forward to the final. Derek and Aidan are some ambassadors for our club. We are so, so proud of them.”

The first half fare was, well, poor to awful with the hurling lacking intensity and sparkle. Three times the scores were level during the opening 17 minutes before Derek Lyng won a drive from the Dunna’ defence before winning his side the lead (0-5 to 0-4).

A push in the back on Lyng in the 25th minute earned a point from a free shot by Aidan Fogarty. Emeralds drove on to lead by 0-8 to 0-4 at the interval. While the Dunnamaggin defence looked assured, their midfield was out of it and the supply of ball to the attack was poor.

Lyng was falling back deep from his wing forward post to supplement the Emeralds midfield, and their supply of ball forward was good. Territorily Emeralds won the exchanges in that half by the proverbial mile.

The second half was less than a minute old when the ball was in the winners net. Interval sub, Seaghan O’Neill off loaded a shot from nearly 40 metres, and somehow the ball sneaked into the left corner of the Emeralds net at the country end. A foul on the same player gifted Willie Phelan the equaliser from a free in the 32nd minute.

The action was warming up; heading towards a crescendo we could never have imagined, bearing in mind what had gone before. Fogarty won back the lead for the winners. Kieran Bergin equalised in the 35th minute after taking delivery of a pass from Sean Connery (0-9 to 1-6).

Young Martin, a quiet but deadly presence, arrowed over a wonder score off his left and on the left sideline in the 39th minute. Canice Hickey (65) replied to that.

During the next few minutes Emeralds threatened to run away with the game. The first step forward was taken when defender, Brian Troy latched on to a loose clearance from the Dunna’ defence before shooting a point. Fogarty’s classy goal was followed by a quick point from Alan Guilfoyle and then another point from himself (1-13 to 1-7).

Dunna’ looked on the ropes. A goal plundered from a 20 metre free by Kenny Moore revived them. After Fogarty registered again, Noel Hickey, Darren Fitzpatrick and Kenny Moore had minors to snatch back the initiative for Dunnamaggin......

Or so we thought! Emeralds were winding up for the finish. Martin pointed them in the direction, and they simply went for it.