Kilkenny GAA: Cody delighted with team’s refusal to give up 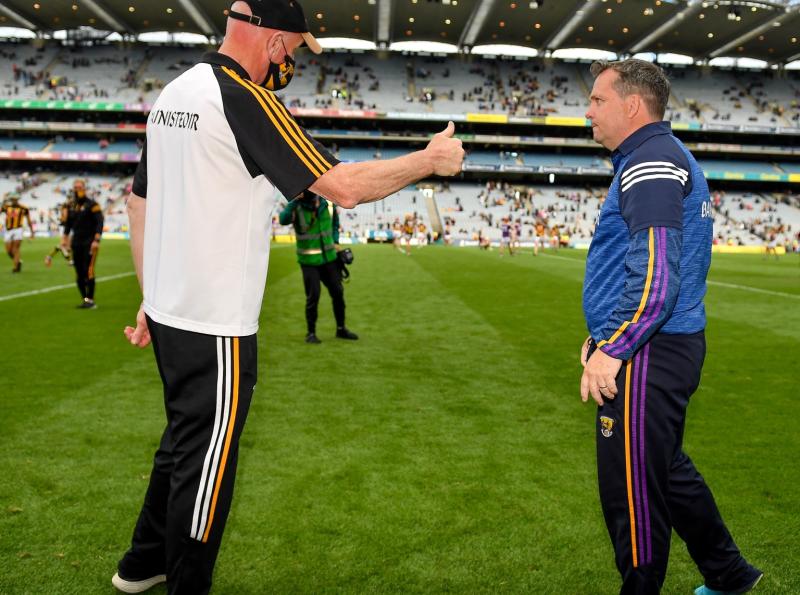 After it had all ended Brian Cody and Davy Fitzgerald were still able to embrace after both Kilkenny and Wexford engaged in a thrilling Leinster SHC semi-final.

Unlike in previous meetings Kilkenny found a way to overcome their near neighbours and for the Kilkenny boss it was a case of job done as well as heaping praise on all the players on the field.

“It was a huge ask for both teams and it was serious stuff for the 75 minutes or so and that alone is a massive ask of players not to mention an extra 20 minutes on top of that.”

“It was a huge reflection of the quality on both sides and obviously extra-time didn’t start too well for us as we lost a player almost immediately as well as a goal conceded but in that following 10 minutes the resolve of the players was absolutely outstanding and the attitude, character and workrate that they showed was there for all to see.

“That was a win for the whole squad and it gets us to a Leinster final but it didn’t get us any further so we haven’t won any silverware yet.

“It was just a championship game we wanted to win and we did that so we can look forward to the Dublin game.”

There’s been a lot of talk as regards the strength of Kilkenny’s squad but they gave a defiant answer with the subs contributing 1-7 to the Cats total on Saturday.

“I’ve made no secret of the potential of our panel and its there,” Cody admitted.

“Seven of our subs scored today which is massive and there’s a great spirit and effort in the side.

“It was a battle and a half and it was hugely physical but that’s what hurling should be like.

“The crowd would have enjoyed the game and it certainly added to everything but we are very happy as winning games like that are what it’s all about.”

In a game where neither side was on top for long Cody took great joy in the battling qualities of his side.

“There was several turning points in that game today and neither side could get away from the other as that’s the type of match it was and even when they got their goals we were able to recover,” he said.

“The most taking part of our performance was the sheer refusal of the lads to give in and they kept going until the end.”

On the opposite side it was disappointment for Wexford boss Davy Fitzgerald in a game they could have easily won and he thought they were the better side overall.

“It was a great game but that doesn’t mean anything to me as winning is everything and I thought we were the better side over the 70 minutes but one or two things went against us.

“You have to say fair play to Kilkenny though as they never give in and they stayed with us for the whole game but I think we should have won it.

“Kilkenny aren’t better than us and I think we showed that today.”