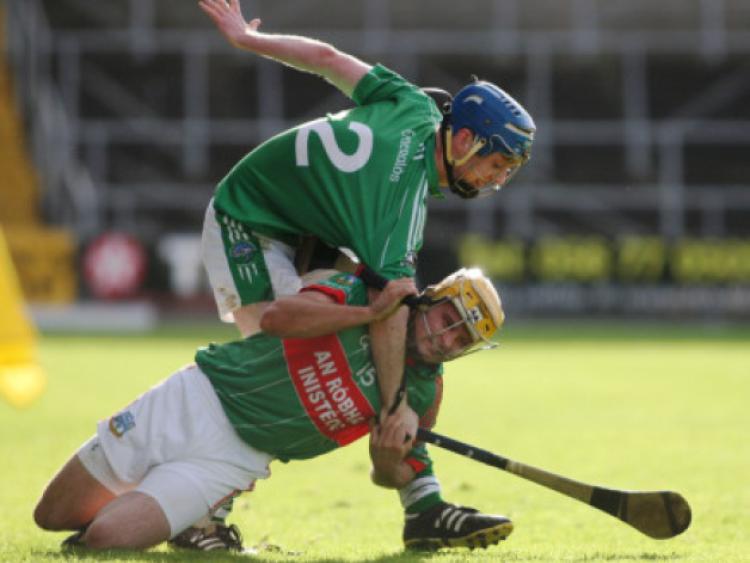 Having waited 25 years, it was inevitable that the Rower-Inistioge would take a few minutes more before clinching the intermediate title.

Having waited 25 years, it was inevitable that the Rower-Inistioge would take a few minutes more before clinching the intermediate title.

A quarter of a century outside of Kilkenny hurling’s senior ranks came to a glorious end for the Inistioge men on Sunday, but Emeralds (Urlingford) did their best to spoil the party.

The North Kilkenny side looked to have stolen a march on their rivals when, having trailed for 54 minutes, they crept when sub Jamie Ryan used his first touch to snap up a point to make it advantage Emeralds for the first time (2-10 to 2-9).

It was at that stage that Inistioge’s championship credentials were tested the most, but they rose to the challenge. Led by their captain Michael Grace they drew level, then did it all over again when Grace converted another free to cancel out Francis Clohessy’s minor score.

With the action ticking into injury-time the game was in the melting pot for both sides, but Inistioge were not about to be denied.

It looked like they had missed a chance when Joe Lyng went for a long range point but while the sliotar went wide it was adjudged to have taken a nick off a Urlingford hurley en route.

There was some argument about the awarding of a 65, something that didn’t do Grace any favours as he stood over the ball, but it didn’t matter. His nerve held, the sliotar split the O’Loughlin’s End posts and the Rower were on their way!

The men in green and red were all action from the off, stamping their authority on the game quickly, and stylishly. Efficient attacking yielded 1-2 inside four minutes, the goal coming after Sean Grace drove through a cluster of players to win a loose ball and rammed it to the Emeralds net.

It looked like the Rower would run riot, but Emeralds managed to kick into gear. A point from the marauding Joey Doheny got them up and running, the corner-back breaking far enough forward to turn Aidan Fogarty’s pass into a point. Padraig Phelan grabbed another, closely followed by an Alan Guilfoyle effort which slipped over the crossbar to bring a better complexion to the scoreboard (1-2 to 0-3).

It looked like Urlingford had turned the corner after suffering that nightmare start, but they were about to suffer another gut-wrenching twist. Following points from Cathal Bolger and Ciaran Ryan, Ryan charged in to boot a loose sliotar to the net on 18 minutes.

The goal was a hammer blow to the Emeralds, who found themselves seven points behind (2-4 to 0-3), but still they didn’t panic. Aidan Fogarty was key to their recovery, arrowing over a 20th minute point to ease the pain of that second Rower goal.

However, Fogarty wasn’t content to just pick off points. His next involvement showed a cool head - and a keen sense for the environment.

Standing over a close range free with an eye-watering sun at his back, Fogarty knew to keep his shot low. With the sun glaring into their faces, the Rower defence assembled on the line didn’t see the sliotar until it crashed into the net.

That was a steadying score for Emeralds, who found it tough to get the better of the Rower defence, but they couldn’t build on it. The next time the scoreboard changed it was in Rower’s favour, Tom Murphy and Cathal Bolger tacking on points to push the gap out to five. Aidan Fogarty found time to mine one more free, but it still left the Urlingford men chasing a four-point gap at the interval (2-6 to 1-5).

The game continued at its cautious pace into the second half, but it was Emeralds who fared better. Two Fogarty frees helped them outscore the leaders in the third quarter, as the Rower seemed to get stuck in neutral.

Michael Grace’s first placed score of the game (only their second point of the new half) allowed the Rower to move three points in front by the 46th minute, but they didn’t look overly comfortable. They got a fright just 60 seconds later, when Liam Tierney failed to read Brian Troy’s booming clearance and let the sliotar bounce a few yards inside the end line.

Conor Martin was quickest to react, coming in to win possession and smuggle it towards Alan Guilfoyle. The target beckoned, but the full-forward couldn’t connect with the ball, allowing the Rower to heave a huge sigh of relief.

The wind was quickly taken from their sails, however, as the Emeralds landed a bolt from the blue with eight minutes to play.

Awarded a free on the left of the square after Shane Norton was hauled down Aidan Fogarty went for broke, lashing a powerful strike at the goal. Tierney did well to get something on it, but couldn’t stop the sliotar from flying into the net.

It was a score which awoke the Urlingford crowd, who roared their approval, but the Rower didn’t panic. Even as the game was whipped into a frenzy they stayed cool, not least Grace with that high-pressure 65 in injury-time. Sub James Cassin followed up with an even later point, one to make sure of his side’s ascension to the senior ranks and start one hell of a party!