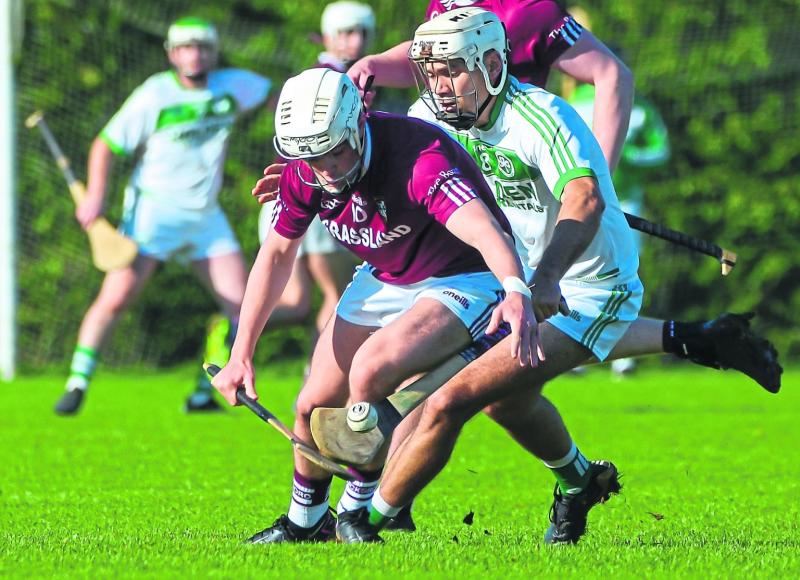 Dicksboro’s Junior team qualified for the final of the JJ Kavanagh and Sons JH Championship Section B following their 4-19 to 1-12 win over Shamrocks Ballyhale.

Shamrocks started with the wind at their backs and were motoring well at a sunny Danesfort.

Captain Enda Fitzpatrick was very involved in the opening exchanges as were Bob Aylward at 11 and Mark Aylward at 15.

Dicksboro got the opening score when a 65, following a brilliant save by Eoin Knox, was dropping short and Sean Maher ran in to flick it over the bar.

By the first water break Dicksboro had scored 1-4 and Shamrocks 1-2, a close game.

Dicksboro scored the first goal when James Carroll arrowed a ball to Aran Treacy Murphy, who took on all comers before rifling past the Shamrocks keeper.

Shamrocks opening score was a goal when Ger Fennelly, who was a revelation throughout the game, found Mark Gorman who slotted home.

Sean Boyd at 12 for the ‘Boro took points for them.

Shamrocks were still in it but had a lot of work to do.

Aran Treacy Murphy had scored a point in an identical move to his earlier goal.

There were wides from both sides before ‘Boro centre back and man of the match Eoin Fennelly launched a long ball towards the Shamrocks square.

The first pull was dealt with by Eoin Knox but the follow-up hit the back of the net.

Liam Brennan Smyth kept up the scoring, following a great puck out from Brian Manogue.

Shamrocks lost both corner backs, to injury and illness and centre back Conor Walsh had a heavy fall just before half-time.

He continued valiantly to finish the game but Dicksboro made good on their dominance, the half-back line, led by Eoin Fennelly in particular were in control.

His first cousin Ger Fennelly then moved to centre back for the Shamrocks.

Dicksboro won a tough battle and Sean Boyd was in for their 3rd goal.

They followed with points from Nick Doheny and Edward Moylan.

The two Moylans, at halfback and midfield, are first cousins of Shamrocks centre back Conor Walsh.

Seanie Boyd was central to the 4th goal as well.

He made the run with the ball, giving it to Nick Doheny for the finish.

Mark Aylward and Gorman got points for Shamrocks and Mark Gorman seemed to shoot for goal from a free, resulting in a point.

At the other end Shamrocks tried to clear a ball but Shane O’Brien scrapped for the loose ball and scored.

Davy Ryan got a 65 and a free before Eoin Fennelly finished Dicksboro shooting with a long range point from centre back.

Mark Gorman finished the scoring for Shamrocks with a free for their tally of 1-12.

Both teams had one shot each late in the game - Nick Doheny had a close range goalshot saved by Eoin Knox - but waved wide.

Shamrocks back Edmond Fitzpatrick had his shot saved and cleared by Brian Manogue.

At full-time the score read: Dicksboro 4-19, Shamrocks 1-12. Dicksboro were full value for the win.

Shamrocks brought the game to them in the first half through Enda Fitzpatrick , Bob and Mark Aylward Stephen Barron, Mark Gorman and Young Dara Mason but they couldn’t penetrate the defence often enough.

Dicksboro made a stand on their half back line and through very co-ordinated interpassing moved the ball through to their half forward line; they overpowered the Shamrocks backs for the goals, despite Ger Fennelly’s overall performance.

Eoin Fennelly, Seanie Boyd and Nick Doheny were all outstanding for the ’Boro.