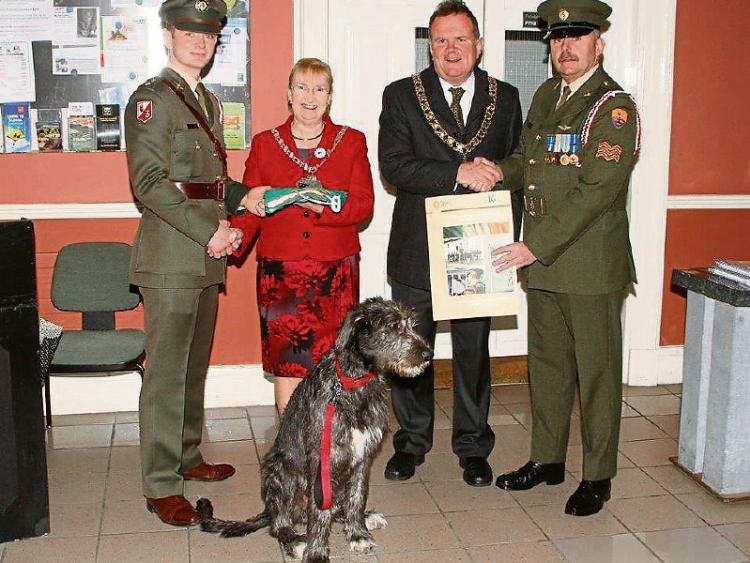 Presentation of the National Flag and 1916 Proclamation by Army Personnel to Cathaoirleach of Kilkenny County Council, Cllr. Mary Hilda Cavanagh and Chairman of the 2016 Commemoration Committee, Cllr. Joe Malone, on 1st January, 2016, at County Hall, John Street, Kilkenny, to mark the commencement of the Year of Celebrations: Ireland 2016.

In her address, Cathaoirleach Mary Hilda Cavanagh said “In the coming 12 months, here in County Kilkenny and, indeed, all over Ireland, community events will take place that represent the outcome of many hundreds of hours of reflection, consultation and discussion involving thousands of people all over the country. During these consultations, the most consistently expressed wish is that 2016 should be a year that belongs to everyone. The people of Ireland expressed the clear desire that whatever one’s political affiliation or interpretation of historical events, 1916 should be regarded as the property of no one but the inheritance of Irish people everywhere.

Equally remarkable is the widely articulated desire that 2016 should be about looking to the future more than looking back, and that the primary purpose of looking back should be to rediscover the ideals and consider the context of the actions of the revolutionary generation in the present, as a guide for our future.

In the consultations people of all ages and backgrounds expressed a wish to rekindle the idealism that in 1916 found expression in the desire to be independent, to be the authors and carriers of our cultural heritage, and to be equal among ourselves and among the nations of the world – in short: to create a country worthy of the title Republic, 2 she concluded.