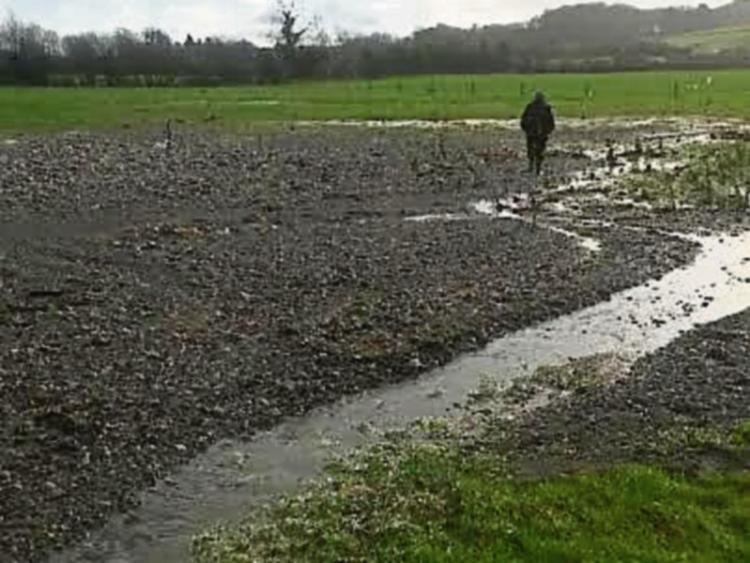 Utter devastation met Cllr Michael McCarthy of Fianna Fail when he visited the Dillon farm at Cooleshall, Freshford in the aftermath of the floods.

For generations the Dillon family have farmed on the outskirts of Freshford where the Nuenna and Arigna rivers run through their land.

Over the years but especially of late, flash floods have seen the Arigna river cause significant problems both on the Kilkenny/Freshford road and on lots of farm land in the area.

Last week, the force of the water swept away approximately 25 metres of the river bank on part of the Dillon farm, actually diverting the whole course of the river across the lands, with the ongoing gushing water submerged 10 acres completely and destroying everything in its path with stones, sand and debris left in its wake.

Cllr McCarthy said that this is a typical example of how peoples livelihood has been affected by the recent weather.

“We have to help people who have been left devastated after the floods,” he said.

“Where possible, the council must use its resources to help landowners with the unprecedented damage caused by the floods and we need to work with them to ensure protection measures are put in place.”

He encouraged people to look up the county council website or get their hands on the leaflets provided by the Department of the Environment on dealing with the aftermath of the floods.

“Farmers should also contact their local Teagasc advisor to find out the best way of dealing with land flooded in recent weeks.”