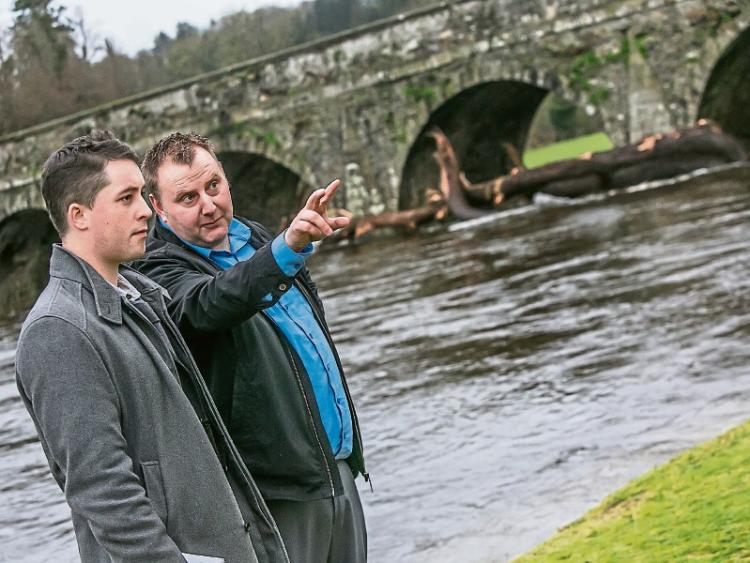 There is a sense of weary resignation about how people in Inistioge are coping with the most recent floods – the worst in decades.

There is no immediate salvation or magic bullet to keep the river at bay. Unlike Thomastown and Graig’, no pilot scheme is on the horizon, for now anyway. Tidal issues further complicate matters.

Last week, days after the waters had receded, sandbags still lined the streets of the square. Between the lower part, and the quay, dozens of premises had flooded during the peak of Storm Frank.

“These all flooded badly,” says Cllr David Kennedy, gesturing along the row of shops – The Mermaid Gallery, Floodlights (restaurant).

“I'm here ten years and I have never seen it as bad.”

Across the road in Ashe Antiques, Annette, Billy and dog Teddy Delicious are trying to get back to normal. At 95 years of age (96 after his birthday since), Billy had to leave the house by boat at the height of the floods.

“We just moved back in last night,” says Annette.

“The council have been great – it's the third time now that the lorry is down.”

Life goes on. The floors may be all up and the doors warped, but the shop is back open for business.

On the quay, the river was up several feet – the water marks still visible on many walls.

From the outside, a sense of order has been restored. It's almost hard to imagine the chaos that reigned only four days ago.

Solutions are not immediately forthcoming.

“If you put a flood barrier here, you would take away the natural beauty of the area,” says Cllr Kennedy, echoing the sentiments of many locals.

Unlike their fellow flood victims in Thomastown and Graignamanagh, people in Inistioge will not be seeing a pilot scheme rolled out in the year ahead. Problems are complicated by the tidal aspect of some of the flooding, which Cllr Kennedy significantly reduces even the effectiveness of dredging.

At one stage, water was over the crossbars of the posts on the GAA pitch. Much of the grass is still under a few inches of water.

In the house opposite – one of the oldest in the village – Virginia is praying her fridge will be salvageable. Her floors are all up as well.

Water rose alarmingly fast up the back garden, pouring into the house as they tried to move valued possessions up out of harm's way, The force and volume of the water was such that a telephone pole, which was located at the far end of the garden, now lies near the back door.

“We got a lot of stuff up high in the nick of time. We have been running the dehumidifier non-stop.”

Like other people here, she remains upbeat in spite of the difficult circumstances.