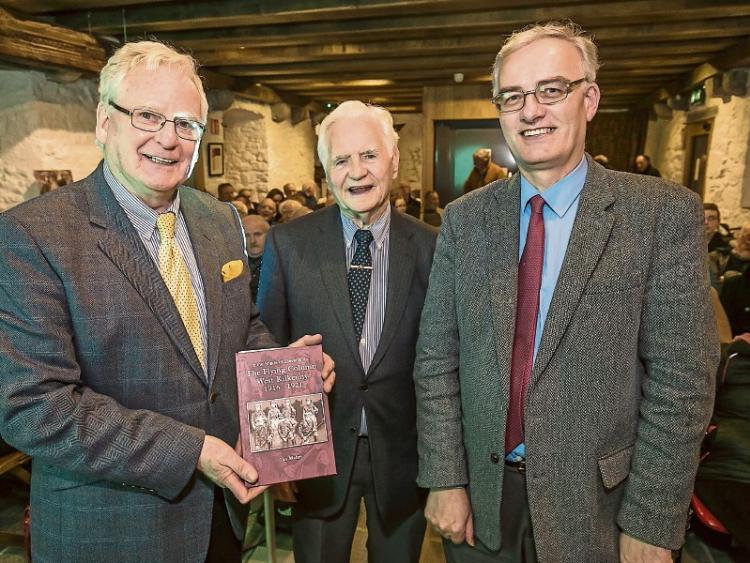 The first noted event of remembering 1916 was the lecture by local historian Jim Maher - the Rising and its aftermath in Kilkenny.

Jim is the most valued voice on the period in Kilkenny having taken the time, while many of the men were alive, to talk to them, record their thoughts, and visit the scenes of action.

But while Jim concluded with the statement that the 1916 Rising was essentially a Dublin rising, he nevertheless enthralled a packed attendance with his local knowledge - many nuggets unveiled for the first time in words, text and photograph.

And the aftermath, locally, was very much shaped by this newspaper, The Kilkenny People and its then editor ET Keane, whose writings in the months after the rising ensured the election of two Sinn Fein candidates. Indeed a letter from Michael Collins to Eamon De Valera was displayed, showing Collins having been in contact with Keane on the election trail.

As Seamus Brennan of KAS put it at the conclusion, Jim gave a lecture on real people, which ran in tandem with the mainstream of the events. He was also thanked by Tony Pattison, who described the 80 minute talk as “electrifying”.

And so to the lecture, and what Jim unveiled. Arthur Griffith's Sinn Fein, which was founded in 1905, opened it's first branch in Kilkenny in 1907, in Thomastown.

But the most significiant connection with Kilkenny was the arrival of Thomas MacDonagh to teach in St Kierans College - from 1901 to 1903. At the time, despite MacDonagh's promptings, the school did not teach Irish -yet he joined the Gaelic League and would have attended meetings in the Gaelic League room in Rothe House.

MacDonagh left the League over a row with Alderman James Nowlan (of Nowlan Park fame) and Edward McSweeney (Jim's Uncle) over a job appointment - both men were IRB members and would have sided with same. Another interesting date was Roger Casements's visit to The Parade in 1914, where he met Peter de Loughry.

And of course Tom Treacy, Pat Corcoran and De Loughry and the split of the Irish Volunteers, when 28 men bravely walked past over 600 comrades in 1914.

Months later, 5,000 National Volunteers were in attendance for John Redmond receiving the freedom of Kilkenny.

Jim also noted the three Republican deaths - Patrick Bealin from Castlecomer - summarily executed by the British in the cellar of a bar he worked in for delivering a message to volunteers; Thomas MacDonagh who was executed by firing squad and Fr Albert Bibby, a famed Cappuchin who supported the volunteers and was sent to America in 1924 and died there from TB.

At the time of the Rising, Kilkenny had 60 men on standby, few arms as they planned to meet with their Wexford comrades just outside Kiltealy, and on the way collect guns in Borris. Nothing materialised, 'Ginger' O'Connell was run out of Wexford but convinced Kilkenny not to arm and march. Pierce Brett was the first Kilkenny man to hear of the Rising, from a train driver at the now MacDonagh station and he told Tom Treacy.

Thirty five Kilkenny men were arrested, brought to Kilkenny Jail, one died marching to the tain station - John Kealy - who was suffering from pneumonia.

They went to Richmond Barracks, then boarded a cattle boat, arrived in Wakefield, spent time in Frongoch, then Wormwood Scrubs, before coming back to a very different Kilkenny in August of that year.