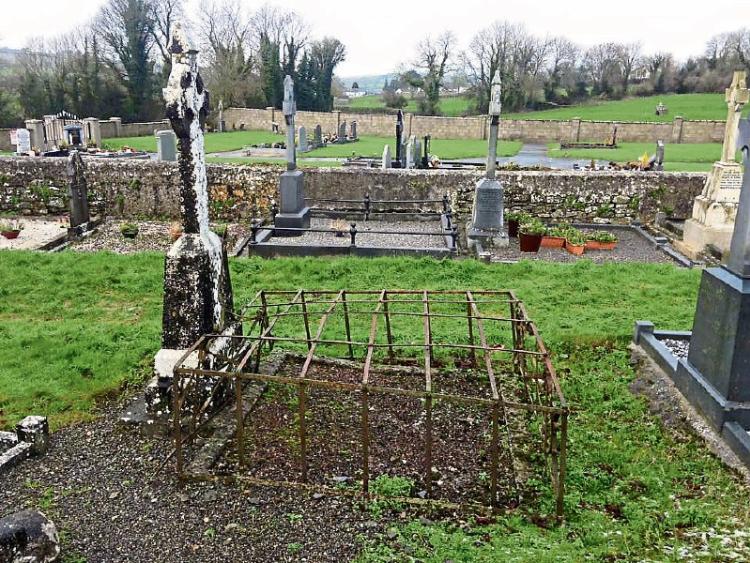 The practice of body snatching was widespread in the 19th century.

And those people with the means, attached devices to the graves of their loved one, to recent the unscrupulous thieves.

A rare example of what became known as, mortsafes is to be found at Tullaroan graveyard.

They are scattered in cemeteries around the country and many younger people will have no idea of their use.

These wrought iron contraptions were placed over graves in the 18-19th centuries to protect against the theft of the corpse.

At the time there was a booming trade in newly deceased bodies for sale to medical colleges as anatomical specimens.

Coilin O'Drisceoil of Kilkenny Archaeology said that no one has ever looked at the phenomenon in Kilkenny or the rest of the country.

“There must be graveyard watch houses and mortsafes around the county,” he said.

“The increased use of burial vaults inside churches - like at St Mary's Church and graveyard in the centre of Kilkenny city, during the 18th-19th century can also be attributed to the widespread fear of the body snatchers,” he added.

There has long been a demand for human corpses for dissection by anatomists and medical students as well as more sinister uses involving the occult.

For many years, the bodies of convicted criminals, who had died in prison or who had been hanged were used.

Grave robbing was to remain a major problem until 1832 when a new Anatomy Bill was introduced and passed.

Prior tdies of executed criminals was to continue up to the early 1800s. Indeed penal dissection was very much part of the punishment to be inflicted. For example, when William Gordon was found guilty of murder in the High Court, Aberdeen on the 10th April 1822 his sentence was hanging by public executioner and his body to be delivered to Doctors Charles Skene and Alexander Ewing, lecturers in anatomy and physiology in Aberdeen medical school for public dissection.

Inevitably, as the competing University medical colleges and private schools of anatomy in Aberdeen, Edinburgh and Glasgow,grew in number and size the demand for bodies for dissection far outstripped the supply. The shortfall was increasingly met by the activities of a motley collection of unsavoury characters variously known as grave-robbers, body-snatchers, resurrection men, sack-‘em-up men, shusy-lifters, corp’-lifters, Burkers and noddies. They helped meet the demand for bodies by digging up fresh graves in the dark of the night and then selling the corpses to the local anatomists. The quotation at the top of this page taken from the writings the Rev. W. Fleming of West Calder well describes the horrendous scale of the problem.

Grave robbing was to remain a major problem until 1832 when a new Anatomy Bill was introduced and passed.