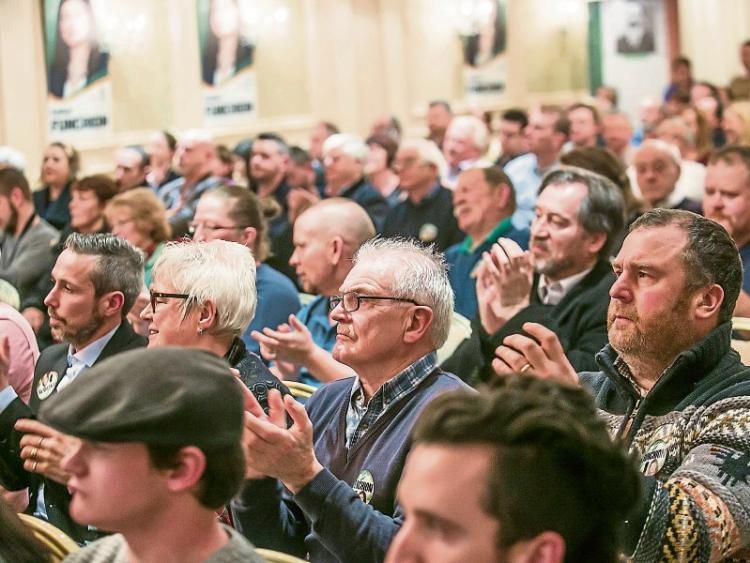 Sinn Féin’s Carlow-Kilkenny General Election candidate Cllr Kathleen Funchion has said that her party’s progressive vision for government is the only remedy to the chaos delivered by the Fine Gael and Labour Party government.

She also called on people living in rural parts of the constituency to make the change to Sinn Féin at the general election.

Councillor Funchion was speaking at the launch of her campaign in the Newpark Hotel last week, where she was joined by Sinn Féin President Gerry Adams TD.

“Sinn Féin’s progressive vision for government is the only remedy to the chaos delivered to Carlow and Kilkenny by Fine Gael and the Labour Party,”she told supporters.

“Our health service is in crisis, with our own St Luke’s Hospital having 39 patients waiting on trolleys two weeks ago. We have one of the highest rates of unemployment in the country and our rural towns and villages have been decimated by a lack of real investment in our public services.

“Couple this with all of the unfair taxes and charges placed on ordinary people, including water charges and the property tax, and it is not hard to see why it has become a constant struggle for working people and their families to get by.

“The nature of the recovery, being spun by the government, is a myth. It certainly is not being felt by ordinary people in this constituency

“Clearly, what Fine Gael and the Labour Party mean is a recovery for those at the top, the developers and the very high earners.

“Sinn Féin has a different vision. A Sinn Féin led government would deliver a better and fairer society for the people of Carlow and Kilkenny. We would defend and invest in our public services, tackle the housing crisis, and build a fair recovery in which workers would have decent jobs with decent pay.

“In a real republic rural dwellers, those who live in the very heart of Ireland, would not be abandoned, marginalised and forsaken by their government. To people living in towns and villages, throughout Carlow and Kilkenny, we say - make the change and vote Sinn Féin in this election. For many of you, it might be your first time voting for Sinn Féin, but I am confident that it wouldn't be your last.

“That is because Sinn Féin doesn’t make commitments that we can't keep and we will keep every promise that we make. That includes the scrapping of water charges, the abolition of Irish Water and the ending of the local property tax, It is really important that the people of Carlow and Kilkenny take the opportunity presented in this election to change the current system.

“We know well what electing Fianna Fáil, Fine Gael and Labour Party TDs has meant for our constituency. It is time that this constituency had a TD that will be a voice for workers and for ordinary people people who are struggling to get by,” she said to rousing applause.