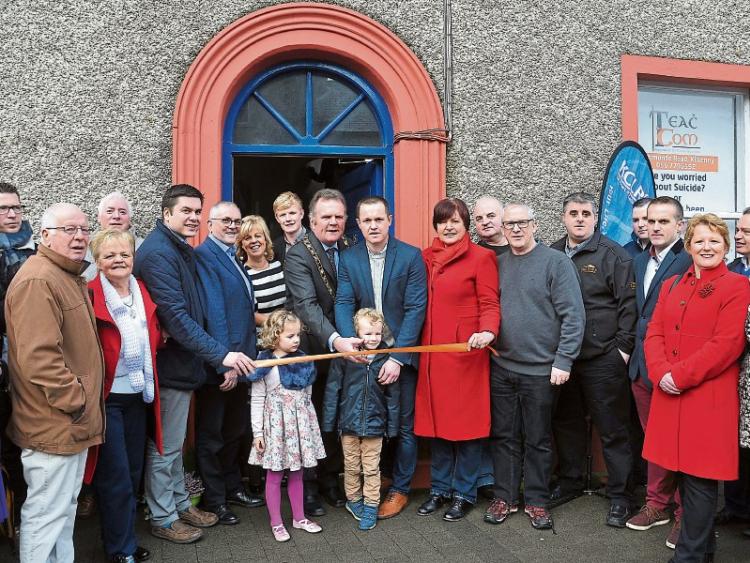 Less than two years after the Thomas Hayes Trust was founded the doors of Teac Tom officially opened.

On Saturday over 150 people gathered at the premises at 15 Ormonde Street to mark the occasion.

The house will provide vital and badly needed services for those affected by suicide including counselling (available 24 hours a day), play therapy and information on other relevant services.

Mayor Joe Malone officiated at the opening and was joined by All-Ireland hurler, Michael Kavanagh.

“I was involved from day one through knowing Angela and the family. It is a very worthwhile initiative as everyone is affected by suicide at some stage. The people of Kilkenny should be very proud for stepping up and treating mental well-being and suicide in this positive and pro active way.

“It is also fantastic that this is a local charity and that all the monies and resources stay within our community.” he added.

Mayor Joe Malone also made a €500 donation to the charity from monies raised from the Suicide Awareness Gathering, which was held recently at St John's Church. Angela first publicly spoke about the deaths of her husband and son to suicide at this event in 2013 and it was from here that the seeds of the Thomas Hayes Trust and Teac Tom were sown.

Teac Tom is a premises offering 24-hour care - it is currently located on Ormonde Road but its permanent home will be off Johns Green (it is expected to be two years before this premises is ready). The house on Ormonde Road provides free one to one counselling to individuals and families, family support groups, free play therapy and training workshops geared towards a variety of groups concentrating on 11 to 16 year olds.

Founder of Taxiwatch, Derek Devoy was also at the opening and praised the trojan work of Angela and her team.

“This is badly-needed. The demand for these services is getting busier all the time. The fact that we now have counselling available for people in distress, 24 hours a day, will undoubtedly save lives,” he added.

“This was an emotional day for us. We are saddened that we had to experience our own tragedies in order to help others but when someone comes over and shakes my hand thanking me for this service and that it saved their life it makes it all worthwhile,” said Angela Hayes.