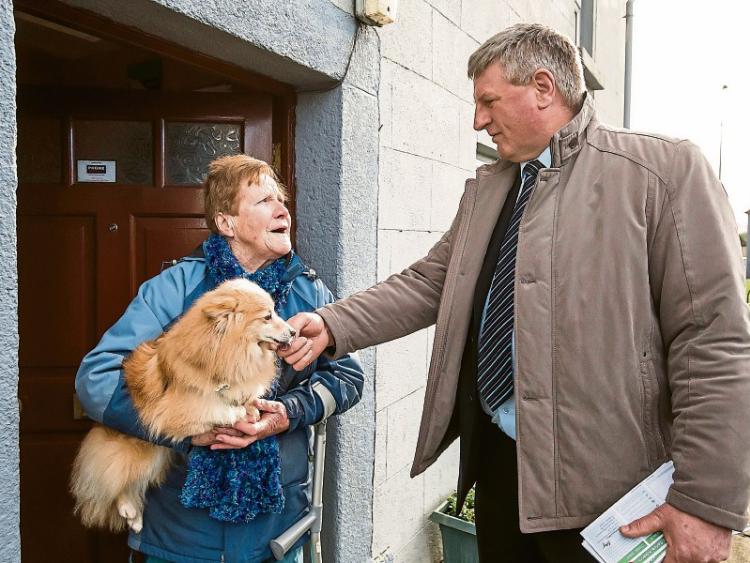 Bobby Aylward is always in good form and he has that knack, that few others possess, of spreading that feel-good factor.

Friend or foe alike, they are all treated with a real respect and going canvassing with the outgoing Fianna Fail TD is always good fun, entertaining and not without a bit of drama.

He has no agendas, just a heartfelt wish to help the people he represents in Dail Eireann.

Even in Paulstown when he received abuse from Sinn Fein supporters he wished them well and politely asked that they exercise their right to vote on Friday.

The person who confronted him, didn't know the name of the Sinn Fein candidate in the Carlow-Kilkenny constituency but said she was giving them her vote and no one else would get a preference.

He refused to bad mouth any other party candidate and when he called to Peggy McGinn, he assiduously took notes.

As we started the canvas, he looked up and noticed the old decayed sign for Paulstown post office and said that one of the first things he will be looking for is a new post office for Paulstown.

He is angry over the closure of Garda stations in the area and disclosed that at nearly every door he came to, it was an issue.

“And while we cannot re-open old Garda stations now because they are in such a bad state or have been sold we can put more Gardai on the streets in our towns and villages.

“There should be some kind of the incentive for Gardai to work and live in a community,” he said.

“A community policeman or woman provides great peace of mind to residents. He feels he is getting a good reaction and completely different from the 2011 general election although he feels he is the outsider of three Fianna Fail candidates this time around.

“As well as crime, housing and homelessness are huge problems now,” he opined.

However it is in health where he wants most change and welcomed the provision of a primary care centre for Thomastown.

“We need to keep people out of hospital and treat them at source. It's cheaper, more effective and people stay in their community and that's what we need,” he said.

Where we can people out of hospital and treat them at source.

Eoin Blake has taken once the Silverweir and

first candidate to arrive at Paulstown no one has come near us, putting stuff in the letterbox.