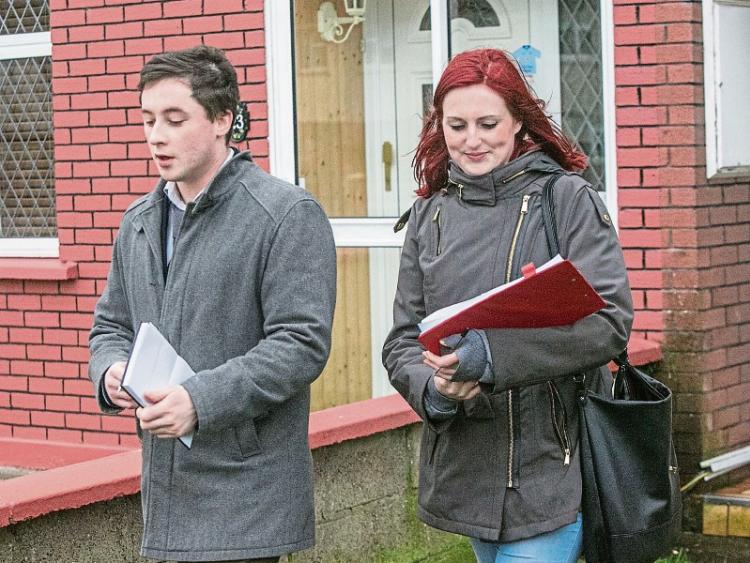 Adrienne Wallace is the youngest candidate running in Friday's General Election, but she does not lack for confidence or capability.

She is personable and affable as she introduces herself to people on the doorstep, usually opening the conversation by asking them how they feel about the Government. On Saturday afternoon in Cypress Grove in Loughboy, most people were not shy about airing their grievances.

“All I can say is you're lucky you're not Labour, Fine Gael or Fianna Fail,” remarks one woman who answers the door.

“To be honest, I haven't made up my mind. I'm taking all the leaflets and reading them. I can't promise anything but I will have a look at it.”

This is not an untypical response.

“It's been very good,” says the People Before Profit candidate.

“People are just fed up.”

Adrienne is joined on the canvass by her uncle, Martin, while two other team members head off toward houses on Cypress Avenue.

“We want to get rid of water charges, the property tax, and the USC. We want to start building social housing and ease the burden on workers. The established parties have no interest.”

Things have changed a bit since last year's by-election, which was Adrienne's first tilt at a Dail seat.

“We have a higher profile now, definitely,” she says.

“It's a good springboard to jump off.”

That is evident at the next house, where resident Frank Gibbons recognises her from a previous debate on Tonight with Vincent Browne.

“I was impressed by you,” he says.

He receives Adrienne well and has time for her, but is also clearly disillusioned.

“There's no more Frank Cluskey's around,” he says.

At the next door, a woman with two young children listens to her and promises to keep her in mind.

“We want to give the established parties a run for their money,”Adrienne tells her.

“We can't take any more austerity.”

Living and working in Carlow, she has been careful to try and commit equal time to both counties in her campaign.

“We've a good support base in Kilkenny, and they've been helping us too,” she says.

At another door, a man tells her straight up that 'this is a Sinn Fein house' – but she takes it in her stride, and is happy to chat for a while about issues both locally and globally.

“We do a bit of work for Kathleen [Funchion],” says the man.

“But I think you will get a number two. We are sick of the rest of them.

Like his neighbour, he is disullsioned about the prospects of the next Government.

“I don't know what you can do as a small party,” he says.

“I just don't know. I am so sick of it. They just have so much power and control.”

Adrienne reassures him, citing the rise of Bernie Sanders in the US and Jeremy Corbyn in the UK as examples of left wing candidates doing well.

“It is starting to happen,” she says.

“We can put pressure on them. We are not relying on Dail Eireann, we are relying on people.”