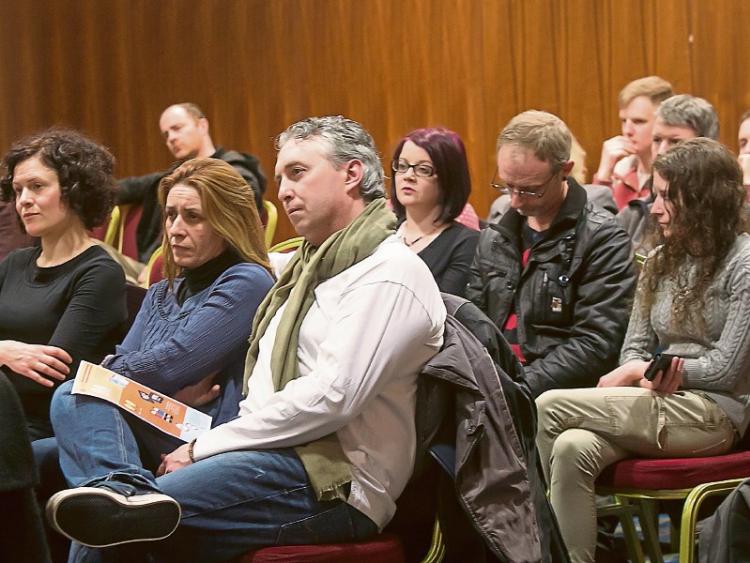 Around 50 people turned out at the Ormonde Hotel last week to listen and contribute to a public meeting on equality in education.

The meeting was organised by local community activist Mick Greene, who thanked everyone for their attendance on what was a cold and rainy Thursday night. He said the purpose of the meeting was to outline the challenges facing children and parents in the Irish school system.

Equality activist Michael Barron – from Glenmore originally – is the executive director of a children's rights group called 'Equate', which advocates for education reform. Addressing the meeting, Mr Barron said that this was not an issue confined to Dublin. He highlighted surveys indicateing that 62% of rural people agree reform of school patronage should be a key priority for the next Government, and 74% of rural people believe a school should not have the right to refuse admission to a child of a different religion to the school's patronage.

“Education is a cornerstone of our society, and our education system should reflect that our society and communities are more diverse than before,” he said.

“It has become apparent that if we don't do something, the system is going to fail more and more children.”

A local parent, Nichola O' Reilly described her experience of growing up in the 1970s and 1980s, moving from school to school, and struggling to fit in due to her agnostic upbringing. She spoke of feeling excluded when other children were making their confirmation, or being told to read a book at the back of the classroom while others learned religion.

“I felt embarassment – I felt like an outsider,” she said.

“And now I feel saddened that here I am 30 years later and there are still laws that allow that kind of isolation to go on.”

“Luckily for us, our children managed to get into the Educate Together school. But I know a lot of people whose children haven't got in, and they are very disappointed.”

Another local parent, Adrian Shanahan, said he had one of his three children down for Educate Together, but that it is vastly-oversubscribed.

“I don't want my kids to be singled out for who they are,” he said.

“My family aren't religious, but we respect people of all religions and none.

“Being told to sit in the corner and colour in for 20 minutes just isn't good enough.”

Mr Barron said Equate is looking to achieve a number of reforms, relating to rural schools, admissions policies, divestment and new forms of patronage, and adapting the classroom to move faith teaching to the end or start of school day.

Two candidates for Friday's General Election were present at the meeting. Cllr Malcolm Noonan said that as chairman of the Kilkenny Integration Forum, the issue was one close to his heart. He said he was very happy with the education his children were receiving in the Gaelscoil and St Canice's Primary, but he fully supported what Equate is trying to achieve.

“Now that we have dealt with one of the biggest equality issues – the marriage referendum – it is time to start tackling the other injustices in our society, and this is one of them,” he said.

Fellow candidate (and teacher) Conor Mac Liam spoke of his own experience having been brought up as an atheist and attending schools of religious patronage.

“I have always stood for separation of church and state,” he said.

“Everyone should be treated equally from the start, from scratch. Every child should have the right to be educated in a school that does not impose a religion on them.

“You have my full support. I think this is something that will come up more and more in the future, and I welcome meetings such as this.”

Principal of Gaelscoil Osrai Sean O' hArgain – who was also there on behalf of Minister of State Ann Phelan – also spoke.

He said there was a need for an English language, multi-denominational, and mixed gender school in Kilkenny. He said he was a supporter of the whole concept of integrated education, and was also committed to upholding the ethos of the school of which he is principal. Mr O' hArgain said he hoped local schools did not discriminate against anybody, and added that, from a party perspective, the movement on divestment from the Catholic Church, Church of Ireland, and faith schools was too slow.

More meetings on the matter are planned for the months ahead. For more on Equate, see www.equateireland.ie.