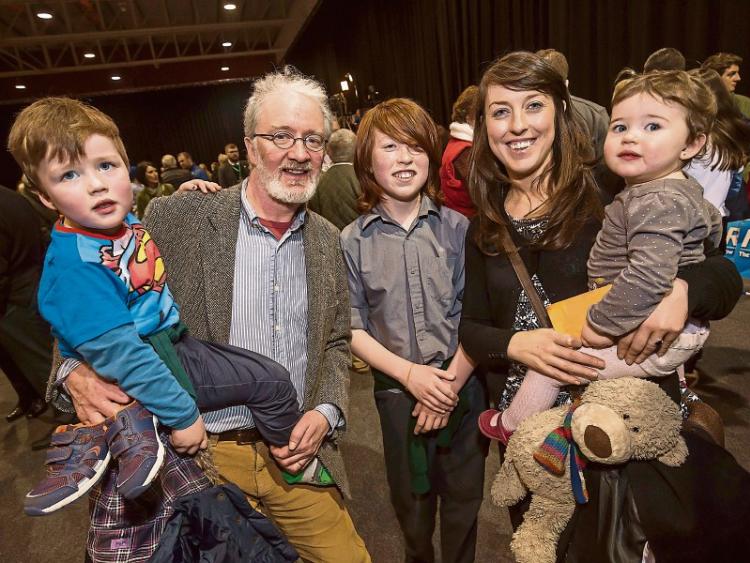 Disappointed following the count, Green Party Councillor and Environment Spokesperson Malcolm Noonan said that he took some solace in the fact that the party had returned two TD's to the Dail and that State funding would now be reinstated due to receiving over 2% of the National quota.

“I'm disappointed for my team and my family. I really thought that my work over the past two decades in Kilkenny was worth more but votes were scattered everywhere and there was strong competition with all City based candidates. I felt we had put in an immense campaign on a modest Credit Union loan and that we beat the socks off of the big parties in the quality of our social media output. We do not have a level playing field here; some candidates have spent upwards of 80,000 euro on posters, ads, van graphics and defacing our traditional shopfronts with their mugs. It's vulgar while families sleep in local hotels and B&B's,” he said.

Cllr Noonan said he was encouraged by the fact that Nationally the electorate had rejected the far right extremism of Identity Ireland and the destructive neo liberal economics of Renua Ireland. He claimed that Renua is now finished as a political party.

Cllr Noonan focused his campaign on rural issues; community development and LEADER funding, regeneration of towns and villages and on social inclusion and childcare issues as well as what he saw being the most ignored issue on the campaign that of flooding and climate change.

“It was notable that no candidate or party was able to deal with the flooding issue or how we can build local defences against the increasing threat extreme weather events. Our campaign brought forward many practical measures and engaged in deep debate on all of the hustings both local and in my role as a National Spokesperson on issues such as disability, health services and education.

“But I found that much of the election came down to local issues and local personalities. I was encouraged by the involvement of young people and their awareness of injustice and inequality' he said.

He wished all the new TD's well but urged a note of caution.

“This constituency has been poorly served by so called National Parliamentarians in the past. The boundary issue in South Kilkenny emerged from a vacuum created by lack of real representation with that community. Similarly many pockets of Carlow and Kilkenny are suffering from extreme levels of deprivation. Kilkenny City is at a loss due to the abolition of the Borough Council by Phil Hogan. Later this year the Central Access Scheme will open to traffic, exacerbating problems with HGV's in residential and school routes. This project was supported by the main political parties. It is essential that the next Dail legislates to prevent other regional towns from being destroyed and to build in resilience in how our regional towns and villages can thrive,” he said.

He hasn't much time to rest. He is chairman of the St Patrick's Day Festival committee. I am proud that I have only missed four Council meetings in 12 years and unlike some other candidates I have not abandoned the forum to which I was elected to in 2014. But I am conscious of the fact that I have fought three campaigns in two years and it has been a real strain on my family,” he said.

Councillor Noonan said that all of the newly elected members of the 32nd Dail had a duty of care to the State to put aside differences and form a Government. He said that the best prospect lay in a Fianna Fail/Fine Gael Coalition. 'This will for the first time in the history of the State offer the electorate a real prospect of a left/right choice as is the case in most other EU States. I am looking forward to seeing our Party Leader and Deputy Leader take their places in the new Dail and bringing back an ecological perspective as it has been sadly lacking' he said.

'Finally I am most humbly grateful for all of the votes we have received; people have to be brave to vote for something radically different. I wish to thank my whole campaign team, my wife Jennie our children, my parents who have instilled in me a deep sense of social justice, to the great hospitality shown to us throughout both counties and to our own local authority staff at the count centre in Cilin Hill. I will be having many conversations with family and supporters over coming weeks on how we can build on this and strengthen our message; because we believe it is a message of hope, resilience and equality, it is for the common good' he concluded.