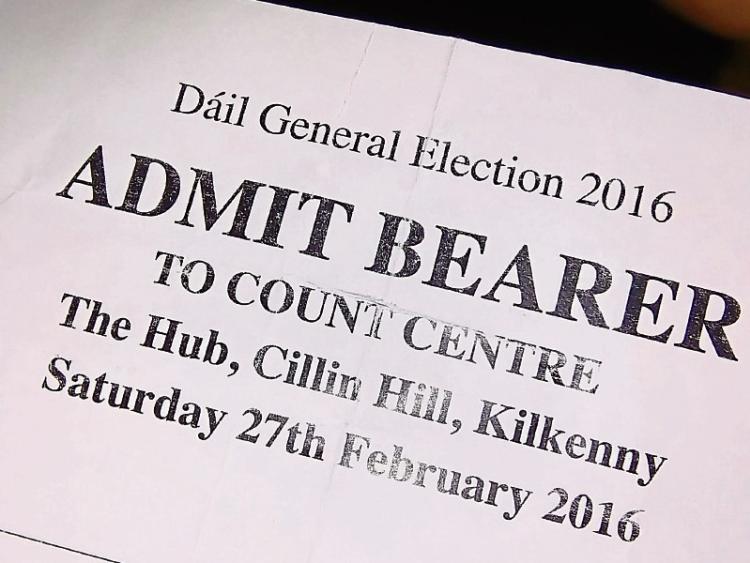 By midnight, the whole thing was thankfully over, with the end result that many had been predicting in the weeks beforehand.

Two Fianna Fail, two Fine Gael and one Sinn Fein – the latter being the only new face in this Dáil constituency. It had not always looked so clear during the day, however.

Carlow Fianna Fail councillor Jennifer Murnane O' Connor was staying roughly 2,000 votes ahead of outgoing TD Pat Deering for the first eight counts or so, and looked set to be take the seat. The possibility of three Fianna Fail TDs getting in had all the Soldiers of Destiny whispering about a return to the good ol' days...

The Fine Gael crew were apoplectic. News coming in from around the country suggested that they were haemorraghing seats to the old foe.

“They break the country, we come in and fix it, and now they're back.”

Pat Deering's gang spent the day looking particularly forlorn. The scenes when he was ultimately elected, having picked up so many transfers from eliminated heavy hitters, were of relief as much as pure joy. Spare a thought for Murnane O' Connor – politics is a cruel game.

One of the big talking points of the day was also the security presence and restricted access to the count area by ticket only. It seems the thinking behind it was that there might be some element of protest or disruption planned, but it did not materialise – and quite how it would have been prevented is another matter.

Some people were passing the tickets around like open currency, and I saw more than one rogue and scoundrel inside the count area. Meanwhile, some people had come out specially or brought their children up for a look, and they ended up leaving disappointed. Even some senior council staff and prominent community workers were left standing outside hoping for a ticket.

The place cleared out quickly enough when the rugby began (please, next Taoiseach – no more spring elections). Soon, the pints were flowing, with the hard work done for some, and all over bar the shouting.

As always, the action ebbed and flowed throughout the day, with the wait between each count giving people time to confer and compare, and sometimes get carried away with themselves. Candidates showed up at different stages during the day, staying for a few minutes if their race was run, or hanging on in hope if things looked positive.

Kathleen Funchion had a busy evening. She arrived early and then left to go and take part in Strictly Let's Dance Callan, before returning to be elected.

In the evening, German Shepherd 'Mikey' arrived at the count to celebrate John McGuinness' re-election.

As things finished up around midnight, already people were beginning to speculate that we might all be back there again in six months' time.

Credit is due to returning officer Marie Garahy and all the staff at the count for having us home much earlier than expected, and to Michael Burke, Jane Coe, and the people at Cillin Hill who looked after us and helped during the day.