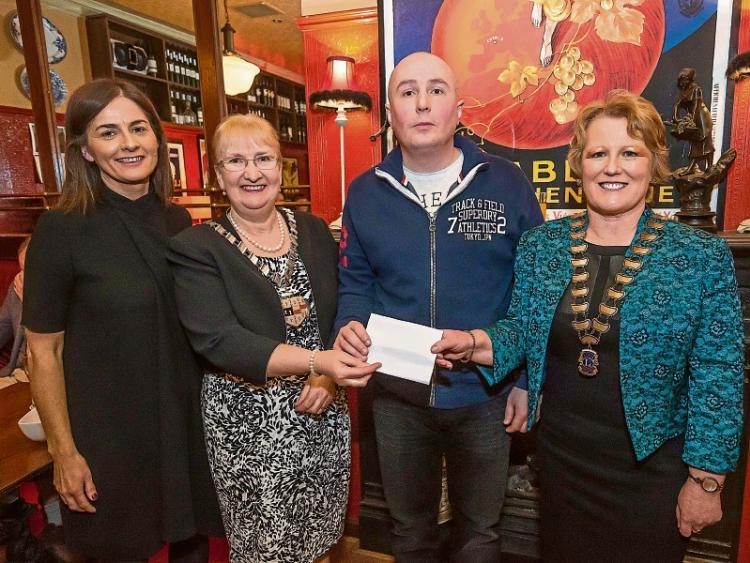 The importance of the work carried out by the Kilkenny Lions club was brought home on Friday night when a number of deserving charities and voluntary organisations received cheques from the benevolent Lions.

“Your fundraising activities are renowned and your constant support for groups such as Kilkenny St. Vincent de Paul has had an enormous impact on the lives of vulnerable people,” she said, after taking time out from a wedding to attended the event in Bollard's bar and restaurant, Kieran Street/Market Yard.

She was particularly impressed by the fact that although the Kilkenny Lions Club was chartered in 1967, it had moved with the times and supports both established charities as well as taking on more contemporary issues.

“For example, your efforts to tackle cyber bullying are to be commended, all the more so as this builds on your strong record of supporting suicide awareness and better mental health awareness.

She singled out current president, Maeve O'Flynn for special praise on this and other initiatives

“Your engagement with youth groups is extremely positive and I congratulate you for the guidance leaflets you produced and distributed on the topic of bullying and cyber-bulling in particular.

“As a politician, I can say that what makes my job worthwhile is seeing the positive difference my work can make in a person’s life.

“ I am sure it is the exact same for all of you. The Lions motto we serve is not just a motto but rather a philosophy which is shared by everyone in this room tonight.

“ In simpler times, there was perhaps a stronger community bond between people in an area. In this modern world, that has been eroded, and voluntary organisations such as the Lions Club are more important than ever.

“Not just for the work you do but for the opportunities you provide to people who want to play a really positive role in their communities.

President of the Kilkenny Lions club, Maeve O'Flynn thanked all those involved in the initiative and Kieran Bollard for hosting the reception and George Candler for doing MC.

She also plugged an upcoming cookery demonstration in the Newpark Hotel with Nevin McGuire on Thursday, May 19.

During the evening representatives of each of the beneficiaries gave a brief synopsis of how the money from the Lions would be used. Each praised the Lions for the difference they made in the lives of so many in the city and the county.