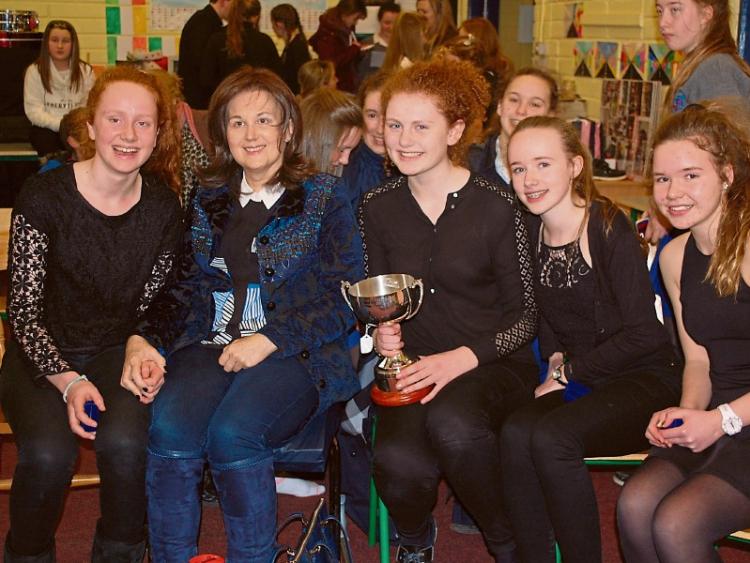 Dicksboro, the most child friendly GAA club in Ireland is holding a further registration event on Friday from 6.30 to 8pm for those parents and others who missed the earlier ones. The club is particularly interested in getting more under 6 players in.

So come along to Palmerstown and see the excellent facilities and enjoy a free tea or coffee and enroll your child. It could be the best thing you could do for them, especially if you are new in the community.

The senior footballers play Piltown in the league on Saturday at 3pm in James's Park. Gaelic football training for seniors is on Wednesdays at 8pm in Palmerstown with Jose. The more the merrier

The most important people in the Boro wills tart training on Saturday. The under 6 and under 8s will begin at Palmerstown at 4pm.

World Day of Prayer on Friday at 7.30pm will be hosted by St. Canice’s Church. Theme “Receive Children, Receive Me” Service was prepared by the Christian Women of Cuba.

Wednesdays of Lent Adoration 10.am – 1pm. Please take the Sunday Gospel Reflection sheets for each Sunday of Lent. Please see details of Lenten Scripture Talk and Retreat at entrance to the Church.

Thank you to the retiring members and to the outgoing Chairperson, Peggy Slattery, and Secretary, Brendan Graham, for all their hours of dedicated service and commitment. We welcome the new members of the Parish Council. The new Chairman is Aidan G. Brennan and Secretary Tony Joyce. We look forward to working together to build up our Parish Community.

Easter Mass and Sacrament of the sick for all Senior Citizens of the Parish will be celebrated at Troy’s Court on Tuesday 8th March at 3pm. Refreshments served after Mass.

St. Mary’s Cathedral Restoration Fund Draw - continues for another 12 months commencing in March. Thanks to all who supported the previous draw. Call to Parish Office to join up (€10 per month) for 2016 for 12 Months.

The Monthly Holy Hour for Vocations to the Priesthood in the Diocese of Ossory with guided prayer and Benediction will be held on Friday in the Blessed Sacrament Chapel in St. Mary's Cathedral from 7 to 8 pm. All welcome

Kilkenny Branch of the Widows Assoc

Meeting in the Club House Hotel on 3rd March at 2.30pm.

With summer time just around the corner, field co-ordinator, Richie Manogue is drawning up a weekly playing field booking roster for both Larchfield and Pairc Sheamuis Stiophain starting immediately. Team managers are requested to liaise with Richie on days, times and venues to ensure a fair allocation of grounds for each age grade. Thankfully, with the much improved weather conditions,of late, the playing surfaces have dried up considerably and grass cutting has commenced allowing for bookings to be made, through Richie, for training and coaching across all grades in the club.

The 17 couples and the event organisers who delivered such a hugely entertaining and successful, fundraising night for the club in Lyrath Estate Hotel just a short few week ago were treated to a "thank you" evening by the club's management in the new, Aroi Restaurante on Saturday night. During the evening, chairman,Tom Lanigan took the opportunity to thank the participants for their commitment, over an intense three month training period, under dance coach, Rachel Ellard, which proved to be a vital ingredient in the success of the venture. Tommy also thanked the many sponsors who contributed generously to the dancer's voting figures which added to the competitive and fun side of the night's entertainment.

At the end of a free ridden Leinster Colleges final on Saturday afternoon, in Nowlan Park, St. Keran's reinforced their dominance of the provincial college's championship, winning their 54 title, with a 2- 12 to 1-11 victory over city neighbours, Kilkenny C.B.S.. Both sides struggled to find their true form, throughout the hour and in the end the two goals, scored mid way through each half, was the deciding factor at the final whistle. Congratulations to club lads, Niall Delaney, Conor Byrne and William Spencer who lined out in the famous black & white jerseys of St. Kieran's, while, all is not lost for the club's representitive on the Kilkenny C.B.S. side, Niall Brassil and Jonny McEvoy as they now have a chance to regroup and progress in the All-Ireland series against, Munster champions, Ardscoil Ris, (Limerick) in the national quarter final.

On Sunday, Kilkenny will host All-Ireland rivals, Galway in Nowlan Park in the third round of the National League programme. This fixture could be described as a "crunch" game with both county's needing a victory to advance their interests in the 2016 National League title race. With star forward, Eoin Larkin away on peacekeeping duties on the Syrian border, the club's interests remain around 9 times All-Ireland medal winner, Jackie Tyrrell and rising star, Diarmuid Cody. Best of luck to Brian and his team.

On Sunday morning the "old street league" concept was revived on Pairc Sheamuis Stiophain when four evenly balanced, U-12 teams took to the fields in "competition". Rather than an outright competitive tournament, the concept is designed to help promote and develop the skills of the game from a young age, so that players can carry what they have learned as they progress through the age grades right up to adult competition. To get the mini tournament off the ground, Team Red beat Team Blue by a single point while Team Green fought out a close battle with Team White. The tournament will continue over the next number of weeks. Meanwhile, it is hoped to do the same at U-10 level in the near future.

The club's sportswear shop opens on Friday night, from 8 to 9p.m.,for anyone interestd in purchasing club gear for the coming season. Club, tracksuits, jerseys, socks, togs, leisure tops, and wool caps are available in all sizes.

Club secretary, Rita Neary advises that the camogie club will hold a registration night for all age grades on Friday night 11th March from 7.30p.m to 9p.m.

Loughboy Library is delighted to participate in the "I'd like to tell her" project being launched in McDonagh Station to celebrate International Woman's Day on Tuesday, 8th March. The project is born out of a desire "to pass on heartfelt messages to our daughters in a world full of negativity and also to remember and celebrate the wonderful women who have touched and enriched our lives". So, why not take the opporrtunity to take a piece of chalk, and at the blackboard, "think of a significant woman in your life and if you had a chance to say something to her, what would it be" !!! Over to you, Ladies

Library manager, Caitriona Kenneally, writes to state that there are places available for the 6 week creative writing course starting on Friday next, 4th March. from 6 to 8p.m.. The course tutor will be the best selling novelist, and Trinity College graduate, solicitor, Tara Heavey. The cost for the 6 week course is Eu 45 (Eu 40 concession). Phone the library at 056 7794176 to book.

As well as being a great therapy, it is said that "to sing is to pray twice", so, why not consider joining the parish choir. The choir meets for practice, in St.Patrick's Church on Monday evenings at 6.45p.m.. New members welcome.

Register for FREE at www.kilkennylibrary.ie to sign up for one of 400 courses available online. The selection of courses to choose from include business, computer training, health & Medicine, law, psychology, science and writing skills. As Caitriona points out "there is something to suit everyone" in the wide selection to choose from, but, you will need a library membership and PIN number to register.

The Young at Heart are invited to HIGH TEA in Kilkenny Ormonde Hotel on Thursday (tomorrow) from 3 to 5p.m., for a Suicide Awareness Forum. Tea / Coffee, scones and music to be "served" during the seminar.

The ever popular, The Aces Band are on stage for Saturday night revellers.