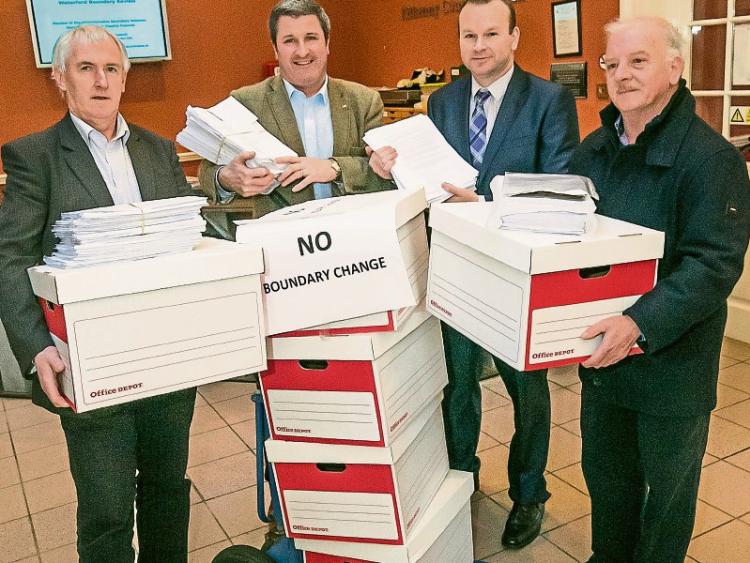 Waterford's stinging submission to the committee carrying out a review of the boundary between south Kilkenny and Waterford has left a bad taste in the mouth of many people this side of the river.

The tone of the submission and its covering letter has left some here a little taken aback. Chairman of the Piltown Municipal District Pat Dunphy last week said he would not be too happy with it.

Kilkenny County Council later gave the boundary committee its response to Waterford's submission, taking issue with what it termed 'non-evidence based statements', some of which it says are not accurate.

The whole affair has served to further strain the relationship between the two neighbouring counties, who are supposed to be working together even more closely than usual at the moment, as part of the European Capital of Culture bid.

Time and clear reasoning may yet heal some of these wounds. However, there are also some rather serious charges levelled at the Kilkenny local authority in Waterford's submission to the boundary committee.

Notably, Waterford has accused Kilkenny of neglecting the area and has accused the council of having shown 'complete disregard for national and regional planning guidelines'.

The Planning Land Use and Transportation Study (PLUTS) was adopted by both councils in 2004. Waterford refers to it extensively in its submission, noting that the capacity for further expansion to the south and east of the city has become increasingly limited.

It says that the 'logical answer' to this is for the city to expand to the north, describing this idea as 'the underlying rationale' for the PLUTS. Several times in the document, it is suggested that PLUTS advocates bringing the northern banks of the Suir within and expanded Waterford City.

Kilkenny has said that the PLUTS does not make any reference to any need for additional land to the north of the city for Waterford. Nor does implementing the National Spatial Strategy require the allocation of more land.

Waterford's submission also charges Kilkenny with attempting to 'rationalise' the development of the Ferrybank Shopping Centre, referring to it as 'a staggering retail white elephant'. This has raised a few eyebrows in County Hall here.

Waterford's submission also expresses concern that the Ferrybank/Belview LAP 2009, as amended, could 'potentially compete and undermine the role and primacy of the city centre'. But, as Kilkenny has pointed out, Waterford's city centre has been underperforming for a while now, with no new significant retail offer in over two decades - and long since before the Ferrybank centre.

Kilkenny has argued that the wide tidal river, the Suir, creates a 'significant' physical barrier between the city and the area of interest. It says the concentric development model, which is not the growth strategy adopted in the PLUTS, is not a basis to argue for a boundary extension.

Indeed, none of the relevant bodies, including the NSS, PLUTS, regional authority, and Department of the Environment, have raised the issue with any of Kilkenny's development plans.

In terms of economic development, Waterford cites a range of reports and policy documents, including the South East Action Plan for Jobs, as well as IDA and FDI strategy. None of these, however, call for a change to the existing boundary - rather, they generally advocate a unified regional approach.

The Waterford submission refers to a line in the Action Plan for Jobs, about the need to 'rectify regional impediments to winning investments'. But at no point in that Action Plan is the boundary identified as an 'impediment'.

Kilkenny has also said there is no evidence for Waterford's claim that Waterford City and County Council 'has committed personnel and budgetary resources to economic development that Kilkenny simply cannot'.

It's one more claim that has irked people here who have benefited from some of the local economic development that has taken place in recent years.

The boundary committee is due to submit its report to the Minister for the Environment by March 31.

This is the first part of a four-part series on the boundary and Waterford's submission to the boundary committee. Next week's Kilkenny People looks at the issue of finances and the Belview Port.

For more on the boundary issue this week, see page 19.