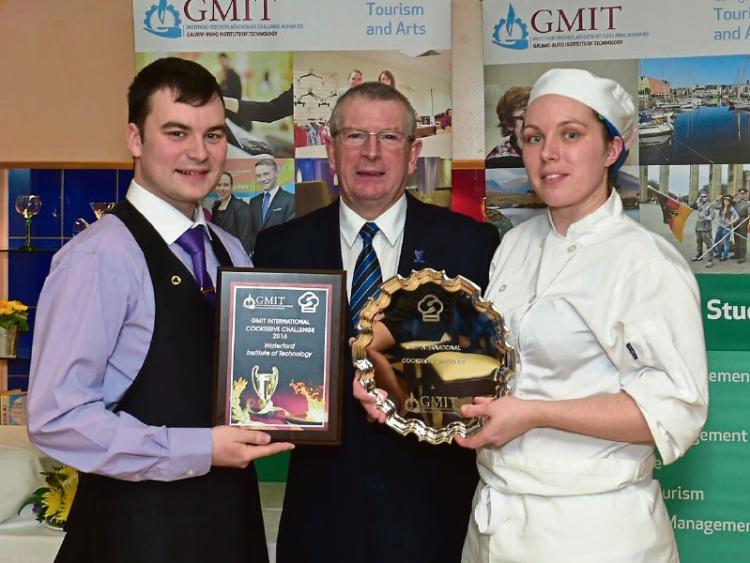 The teams developed their skills under the supervision of culinary coach and lecturer in Culinary Arts, Tony Barry, and Restaurant service coach Ray Cullen, Cuffesgrange, KMilkernny, Head of Department of Languages, Tourism and Hospitality at WIT.

Each student received a medallion of excellence and a trophy was also presented to the institute.

“The judges commented on the excellent standards of the team in both kitchen and restaurant. The value of this experience is a wonderful addition to their CVs now that they have competed at this level. We would also like to thank Paula Harrington, pastry chef and Michael Thomas executive chef at Waterford Castle for their help along with Colette Gahan from the immersion programme in professional cookery who provided invaluable assistance in preparing the team,” said Chef Barry.

“A number of our students are return to education students who had previously worked in other trades. Their success at the International Cook Serve Challenge 2016 is a great example of how mature students flourish. At WIT mature students have up until 1 May to apply for most courses, and we are happy to talk to people who are considering returning to education this September,” he added.

Ray Cullen, who has previously had major success with students at both national and international competitions, commended the performance of the students. “A competition like this exposes students to the demands of the real world at both front of house and in a busy kitchen. Bringing home four awards as well as being the winner of the inaugural competition places WIT firmly on the map in terms of our culinary arts prowess and the level of service we train our students to deliver.”

The event required a team of 10 students, five in Kitchen and five in Restaurant to prepare, cook and serve a meal to 30 guests and judges, within 5 hours with a €300 budget. Their meal consisted of five courses and included the service of wines, a flambé element and an after dinner drink.

Diary note: An open evening takes place on Tuesday, 5 April 2016 at WIT. It offers prospective students, parents and teachers an opportunity to explore the campus and opportunities in person. See www.wit.ie/cao for further information.

The closing date for late applicants to the CAO is 1 May so Leaving Cert students and adults considering a return to education who have not yet applied to the CAO still have time to do so. WIT accepts applications, including mature applications, up to 1 May (except for nursing courses.