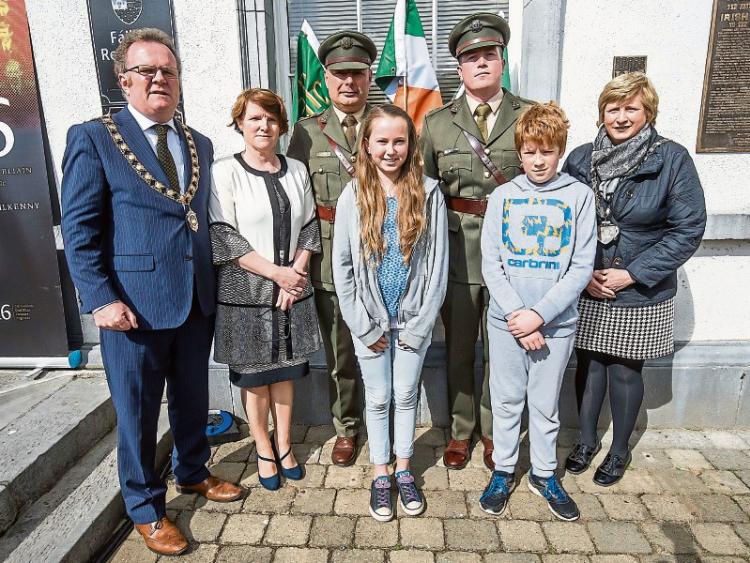 Kilkenny remembered the men and women of 1916 who fought during the Easter Rising with a fitting ceremony which included the dedication of a new memorial garden and brass plaque of the proclamantion at County Hall.

Almost two hundred gathered for the ceremony on Easter Monday which began at noon and concluded, in glorious sunshine within the hour.

The ceremony was attended by invited guests including local councillors and TD's and also family members of local men who joined the Volunteers and played significant roles in 1916 and later the War of Independence.

Indeed the ceremony was open to the people of Kilkenny and many came to witness the dedication of the new memorial garden, and to remember the sacrifice made by many in 1916.

Leas Cathaoirleach Doherty added “Our ceremony will include each of these symbols to reflect our enduring respect and pride, and I will shortly unveil a bronze cast Proclamation which will be a constant reminder to all who stop to read it, of the ideals which underpinned the Rising, and we will hear a new version of the proclamation read for us by pupils of the Kilkenny School Project.

We are delighted to be joined by Adjutant Kealan O’Toole, 3rd Infantry Battalion, James Stephen’s Barracks Kilkenny, who will read the 1916 proclamation and assist with our Flag Raising ceremony. We are proud of our Army who serve at home and abroad in a manner which brings honour to a small island Nation.

The army has delivered thousands of tricolours to primary schools all over Ireland, in a ceremony which will be remembered by all who were present.

As a result we should have a new generation who will understand and respect the symbolism of our flag; be proud to display it properly; treat it with respect, and above all take ownership of it.”

Major Joe Malone reflected on the programme of events which Kilkenny Local Authority is involved in.

“Kilkenny County Council has taken a pro-active role in developing a programme of suitable community events for 2016, with the appointment of a cross party Commemoration Committee supported by the 2016 Coordinator and today’s commemoration is one of a series of events planned by our local Committee.

“So I want to say a special word of thanks to the members of our all party Commemorations Committee, which I am privileged to chair. the other Committee members are as follows: Cllr Mary Hilda Cavanagh, Cathaoirleach, Cllr Fidelis Doherty, Cllr David Kennedy, Cllr Tomás Breathnach, Cllr Eamon Aylward and Cllr Breda Gardner,” said Mayor Joe Malone.

The proclamation was read by Adjutant Kealan O'Toole from James Stephens Barracks and there was also a proclamation representing the youn g people of our community, from the pupils of Kilkenny School Project.

Jack Power and Míde White Ferris read their Proclamation on behalf of their school mates from the city school as they call for respect amongst all, everybody to be treated equally and there was emphasis on homes being provided for all people and a positive loving environment for all the nation's children. Both children did very well in declaring their proclamation for an Ireland of the future.

Adding to the occasion was the music from St Patrick's Brass and Reed Band and the wonderful singing from the Conradh na Gaeilge choir.