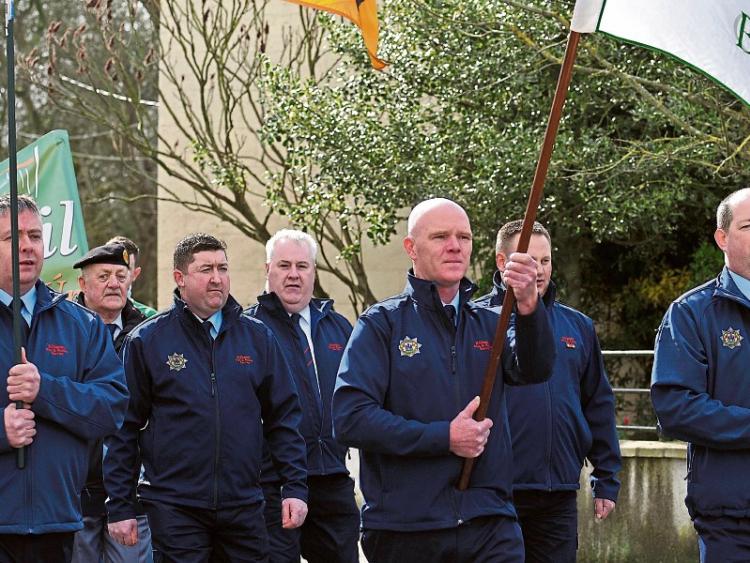 The 100th anniversary Commemoration of the 1916 Easter Rising was remembered with a very large attendance in Freshford on Easter Sunday last.

It commenced with a Parade that made its way from St Lachtain’s GAA grounds to The Square via the centre road of the green.

A large crowd marched behind representing many of the clubs, local groups and individuals holding banners and waving flags that displayed a colourful look and a happy atmosphere along with the lively music of the fifes and drum.

When the Parade reached The Square a commemoration ceremony was performed for the large gathering and was presented by Moira Dorgan MC and consisted of readings, poetry music and song.

Niamh Kennedy and John Meagher presented in both Irish and English a synopsis of Pearse Oration at the graveside of O’Donovan Rossa.

Gillian Queally gave a beautiful rendering of two songs “The Foggy Due” and “She Moved Through The Fair” accompanied by musicians Marie Fogarty( on whistle) and Noel Cleere (accordion).

Ned Kennedy explained the history “The 1916 Rising”. Chris McGrath read the poem “His Blood Upon The Rose” by Joseph Mary Plunkett. Finally Tara Hickey read the Proclamation of the Republic.

The ceremony ended with the two members of the Defence Force Comm. Noel Maher and Pte John Flynn presenting the Irish Flag to two of our senior citizens Sean Kennedy of Ballylarkin and Kitty Minogue from Threecastles, who had the honour of raising the flag after which all in attendance sang Amhran Na bhFiann.