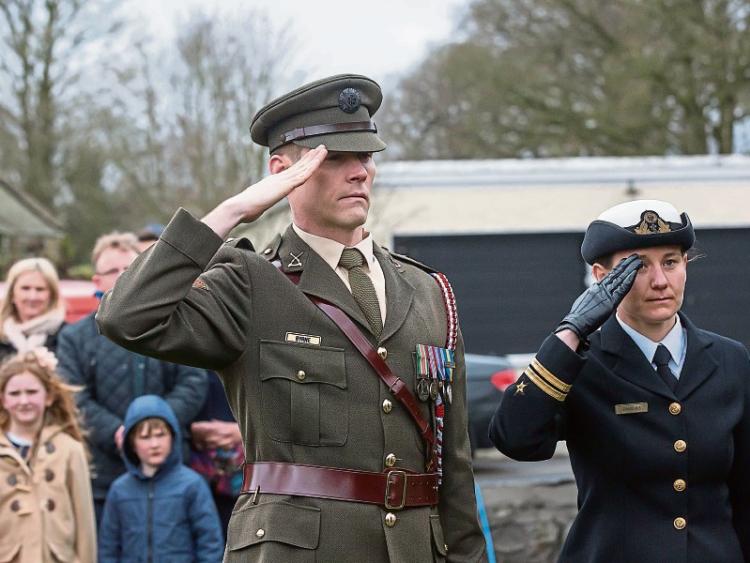 The first non combatant fatality of the 1916 Rising was remembered in her home village of Leighlinbridge last weekend with the unveiling of a memorial with military honours.

Nurse Margaret Kehoe was shot by two British soliders, while in full uniform, as she rushed to attend to one of the Irish Volunteers who lay wounded in the street in the vicinity of now St James Hospital, on Easter Monday, around 1.30pm.

The man she was rushing to help, while in full uniform, was Dan McCarthy, who survived his wounds, was imprisoned in Frongoch and became one of the country's first TD's - and a future President of the GAA.

Nurse Kehoe is the gran aunt of Judy Byrne, wife of Ned Byrne. the proprietors of Byrnes Bar and shop, James Green. And in a further fitting tribute to Nurse Kehoe, the military party consisted of Captain Sean Byrne, who is a son of Judy and Ned.

Margaret left Leighlinbridge at the tender age of nine, as both her parents had died and went to life with relatives. Subsequently she joined the South Dublin Union in 1897 , a hospital run by the Sisters of Mercy and it is now St James Hiospital.

The GAA connection, attempting to reach Dan McCarthy, insured that Margaret's bravery was remembered by the local club who put up a plaque in her honour in 2009.

It culminated with a wonderful, well-attended tribute to honour the memory of the woman who lost her life as the first non-combatant, coming to the aid of a wounded Volunteer.

Also among the colour party was Lt Grace Fanning, who will join her naval colleagues on the LE Eithne shortly as they continue their humanitarian work in the Mediterranean.