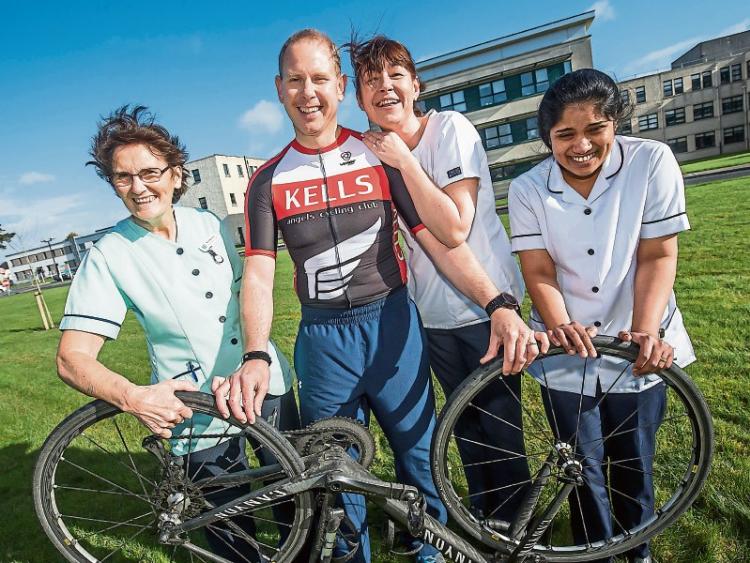 A Kilkenny father-of-three survived a crippling stroke just over a year ago to make what friends and family are calling a ‘miraculous’ recovery.

And in gratitude to the quick-thinking medical staff at St. Luke’s hospital, where he was treated, he is now ‘paying it forward’ by cycling 100 kilometres to raise money for the hospital’s stroke unit.

Martin Connolly (45) from Stoneyford was “in perfect health’ when he suffered a massive stroke in January of last year. “ I don’t smoke and I’ve always been fit and healthy”, commented Martin. “I literally got up one morning after 7am to get ready for work and suffered a massive stroke in front of my wife. I’ve since learned that strokes don’t discriminate. They can and do effect anyone, including those, like myself, who appear to be fit and healthy.”

Martin’s wife Sandra called an ambulance and Martin was taken quickly to the stroke unit in St. Luke’s hospital. He had no movement in his arms and legs and couldn’t speak or swallow. Drs. Rory McGovern and Paul Cotter quickly assessed Martin’s condition and he was transferred immediately to Beaumont Hospital where, within hours, his clot was removed. He was back in St. Luke’s that evening for the start of a five-and-a-half-month rehabilitation programme back to full health.

“I had no movement or power down one side of my body and I had to be fed. In total, I spent three weeks in St. Luke’s, six weeks in St. Columba’s hospital in Thomastown and 11 weeks in the National Rehab Centre. I have made a full recovery to be point where I’m back cycling and training with my cycling club. I now know that the first four hours after a stroke are critical and I wouldn’t be here today if it wasn’t for the staff and facilities at the stroke unit in St. Luke’s.

Martin is now spearheading a charity cycle with the aim of raising up to €10,000 for the hospital unit with the support of his cycling club, Kells Angels. The Friends of St. Luke’s Stroke Service Sportive, organised by Kells Angels Cycling Club, will take place on Saturday 8th May at 10am. Participants have the option of a 60k and a 100k route, both of which start from Stoneyford village. All proceeds from the cycle will be donated to the stroke fund at St. Luke’s.

According to the Irish Heart Foundation, approximately 10,000 Irish people per year have a stroke of whom 2,000 die – more deaths than breast cancer, prostate cancer and bowel cancer combined. An estimated 30,000 people are living in the community with disabilities as a result of a stroke, making stroke the third-biggest cause of death in Ireland and the biggest cause of acquired disability.