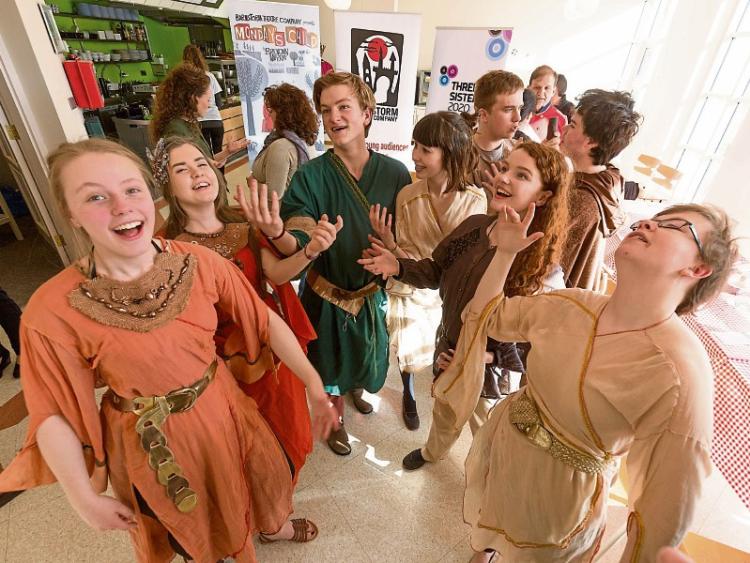 Twenty-five years of hard work were celebrated when Barnstorm Theatre Company and their supporters gathered for a special ceremony at County Hall, John Street, Kilkenny.

As a long established theatre company, Barnstorm have brought a considerable amount of work to a broad audience of all ages. With over half a million children having seen a Barnstorm production there was certainly something to celebrate.

As part of ‘Barnstorm25’ - a specially extended programme for 2016 was launched by Mary Hilda Cavanagh, Cathaoirleach, Kilkenny County Council.

With cast members from Barnstorms upcoming production of Brian Friel’s ‘Translations’ and members of the Barnstorm Youth Theatre group mingling with the attendees the evening was certainly a celebration of the arts in Kilkenny.

“There have been many partnerships over the years which helped to bring Barnstorm to its position as a major player in the field of theatre-making both here and abroad,” said Philip Hardy, Artistic Director.

Everyone has a right to engage with the arts but children need that introduction to theatre, dance, visual arts and music through an adult in their lives.

The MC for the evening was Trish Brennan, chairman of the board of Barnstorm Theatre Company, who spoke of the positive impact of Barnstorm over the years for everyone in Kilkenny.

She recalled attending Barnstorm’s professional plays when her children were young and later joining the adult theatre group which developed into Barn Owl Players - such a great fertile ground for creative work and lasting friendships.

She then introduced Colette Byrne, CEO of Kilkenny County Council, who was effusive in her praise for the body of work created and produced for the people of Kilkenny, and for national and international audiences by Barnstorm and for the support for the arts that’s evident in Kilkenny.

Colette spoke of the importance of the arts in making Kilkenny such a special place, so rich in community, heritage, sport and culture.

She referred to a Fáilte Ireland survey showing that Kilkenny was the second most recognised place after Dublin. She recognised how special Kilkenny is and how we should not take it for granted. She congratulated Barnstorm on a remarkable 25 years and wished them well for the next 25.

The staging of a play on the Leaving Certificate curriculum is a new venture and responds to requests over the years from post-primary schools.

‘Translations’ by Brian Friel is one of the greatest in the Irish canon and one that we are proud to introduce as the first in this new partnership. Barnstorm will offer a specially devised pre-show programme of engagement with Kilkenny schools.

This partnership will see Barnstorm produce a Season of Family Theatre at The Barn, as part of Kilkenny Arts Festival. Barnstorm will host productions from three very different theatre companies, each committed to quality theatre for young audiences.

The Messenger: a partnership with Kilkenny County Council’s Centenary Programme World-premiere of a new play for young audiences set during the 1916 Rising, and seen from the perspective of a young boy living in the Dublin of that time.

Award-winning playwright Mike Kenny has worked with Barnstorm with inputs from RTE Radio presenter Joe Duffy, in creating The Messenger - a play for children aged 8 to 12 - which will be produced this Autumn in the Watergate Theatre and subsequently on an all-island tour.