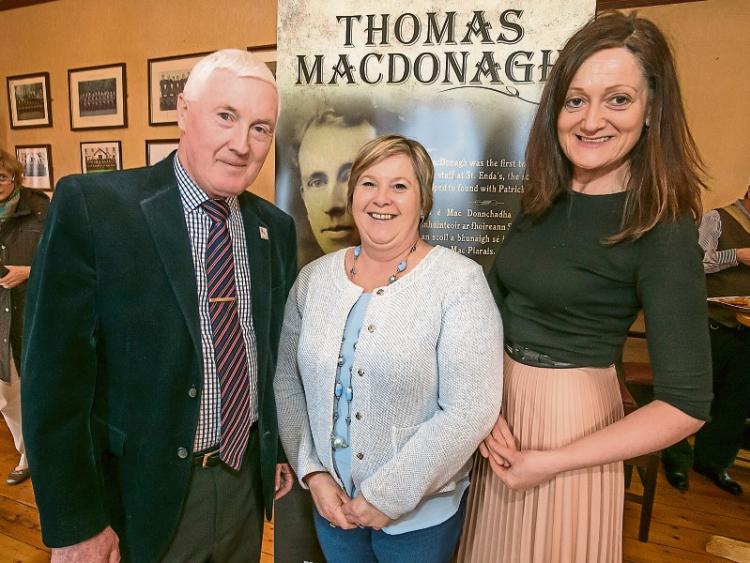 The Kilkenny 2016 Commemorations Plan will honour Thomas MacDonagh a signatory to the Proclamation, who was amongst those executed after the 1916 Rising.

Kilkenny County Council’s all party commemorations committee decided to promote a series of events centred on the life and times of MacDonagh and the places, people and events in Kilkenny which had a significant influence on him. Seachtain Mhic Dhonnchadha / MacDonagh Week will commence on April 30 and run to May 9.

MacDonagh had very strong connections with Kilkenny, he lived and worked in Kilkenny and became more radical during his time here in the formative years of the early 20th Century.

Seachtain Mhic Dhonnchadha / MacDonagh Week is one of the central planks in this year of commemorations.

She noted in her speech, “I can hear people asking why wait until May, why are we commemorating MacDonagh, weeks after the recent National Easter Rising ceremonies in Dublin? Well, as we know Easter is the original “moveable feast” and Easter Monday in 1916 fell on 24th April, and following the Rising came the surrender, closely followed by the Courts Martial, and then, finally, the executions.”

She added “The first military courts martial sat on May 2nd; they immediately sentenced three men – Patrick Pearse, Tom Clarke and Thomas MacDonagh – to death. The three were taken that evening to the disused Kilmainham Gaol and shot at dawn on May 3, 1916 in the Stonebreaker’s Yard.

“And so we are taking the opportunity to reflect on the life and times, and legacy of MacDonagh on his anniversary, starting on 30th April, running through to 9th May, through street theatre, theatrical performance, music and song, and by a lecture as Gaeilge, in Rothe House, which held a special place in his heart.”

One of the highlights of Seachtain Mhic Dhonnchadha will be on May 3rd next, MacDonagh’s 100th Anniversary, when Kilkenny City will host a March Past by troops bound for the Lebanon as part of an ongoing U.N. Peacekeeping mission. Joe Malone, Mayor and Chairman of Kilkenny County Council’s Commemorations Committee said, “It will be open to the public to come and view the Army as they parade through the city streets and I encourage people to come to Kilkenny on the day with tricolours flying to show our appreciation and support for those who are continuing the proud peacekeeping traditions of Óglaigh na hÉireann.”

Other events throughout the week will include:

The Stories of the past are woven in stone…

Rise with revolutionary Thomas MacDonagh as he summons the people of Kilkenny to join in the campaign for independence. Join the men and women of Kilkenny who were influenced by MacDonagh and fought for a free Ireland. Their stories are brought to life on the historic streets of Kilkenny. For more information please visit Facebook.com/the1916project

The Stories Our Streets Can Tell

Free of charge for Seachtain MacDonagh, Tours are normally €5/person

Take the Military Heritage Tour of Kilkenny’s military heritage sites. You will be expertly guided around the landmark buildings and places which were linked to all aspects of activity in the lead up to Easter 1916, and its aftermath. Get the story of the use of buildings such as the Tholsel, Kyteler’s Inn, Rothe House and hear the story of the Friary Street ambush. Tours are guided and booking is through the Watergate Theatre at www.watergatetheatre.com

The 53 Inf Gp currently preparing for it's upcoming departure to Lebanon will have their Ministerial Review in Kilkenny Castle on May 3 at 2.30pm

The Group are commanded by Lt Col Stephen Ryan and are made up of troops predominantly from James Stephens Barracks and the Southern Brigade.

The Ministerial Review will commence with a ceremony in Kilkenny Castle followed by a march through Kilkenny’s High Street where a Minister of Cabinet will be present at City Hall for the March past to review the group.

The troops have prepared for their tour of duty with extensive training since March in Kilworth Camp and the Glen of Imaal.

Midwives of a Nation

Watergate Theatre, Kilkenny, May 20 at 8pm

Free Of Charge, ticketed, booking is through the Watergate at www.watergatetheatre.com.

Carnation Theatre presents: "Midwives of a Nation" co-written with Joe O'Byrne. “Midwives” celebrates the oft forgotten contribution of women to the events of 1916 - the big and the not so big characters of which there are so many: Elizabeth O'Farrell, Margaret Skinnider, Countess Markievicz, Winnie Carnie to name but a few. These ladies were the dispatchers, the doctors, the First-Aiders, the snipers, the tea makers, the gun runners...the list goes on!

Join Carnation theatre as we celebrate the women who were there at the birth of our nation.

The Count, The Countess & The Tommy

Kilkenny’s Watergate Theatre will be the venue this May for the premiere of Myles Dungan's new 1916 show – The Count, The Countess & The Tommy.

The show, starring soloist Simon Morgan - as seen on RTE's Late Late Show - centres on the life and music of the celebrated Irish tenor Count John McCormack, and features some of the best-known songs of a hundred years ago.

May 5th is the date set for the first-ever performance of the show, which goes on to tour Dublin, Roscommon, Cavan, Leitrim and beyond, as part of broadcaster Myles Dungan's Paths To Freedom roadshow project, a unique package of lectures, presentations and shows remembering the Rising, one hundred years on.

Portraits and Lives of Rising leaders to be brought to daily commuters, by Iarnród Éireann in partnership with Royal Irish Academy.

In 1966, the State renamed fifteen stations on the rail network after the executed Leaders of 1916 to mark the 50th anniversary of the Rising. A further fifty years on, and to mark the centenary of the Rising, Iarnród Éireann have partnered with the Royal Irish Academy to enable daily commuters, tourists and visitors to learn more about the people whose names are celebrated in these stations. Kilkenny’s railway station was named after Thomas MacDonagh, who was a signatory to the Proclamation and who was executed on 3rd May 1916. MacDonagh lived and worked in Kilkenny in the early years of the 20th Century.

The display in Kilkenny will feature a specially commissioned portrait of MacDonagh by artist David Rooney and information about his life, taken from the Royal Irish Academy's "1916 - Portraits and Lives" publication. A QR code is included in so that customers can download the chapter of the book about Thomas MacDonagh for free. They can also be downloaded through the following link www.ria.ie/research-projects/1916-portraits-and-lives.

As part of Iarnród Éireann's 1916 commemoration programme we will be hosting a special event, on 7th May in Kilkenny, to remember Thomas MacDonagh, after whom Kilkenny Station was renamed in 1966

MacDonagh Junction Shopping Centre, Kilkenny, will hold a schools poetry recital, 7th May at 11am.

As part of their 1916 commemorations, St Kieran’s College are celebrating the lives of former members of staff Thomas MacDonagh and Francis Sheehy-Skeffington with an inter-schools poetry competition. This event will showcase the finalists chosen by poet Stephen Murray from first year secondary schools in Kilkenny.

In addition Stephen Murray will hold a free poetry masterclass for interested persons in the MacDonagh Shopping Centre on the day. Any person wishing to register for this event should email info@macdonaghjunction.com or see www.macdonaghjunction.com for further details.

There will also be traditional music and dance performances on the day.

To mark the centenary of the Easter Rising, family history experts from Findmypast and Eneclann are touring Ireland to help you trace your ancestors. Join us for a FREE day full of family history on 9th May 2016 in the Carnegie Library, Kilkenny. On the day you can expect: Free access to billions of family history records on www.findmypast.ie Talks on finding your roots and the 1916 Rising.