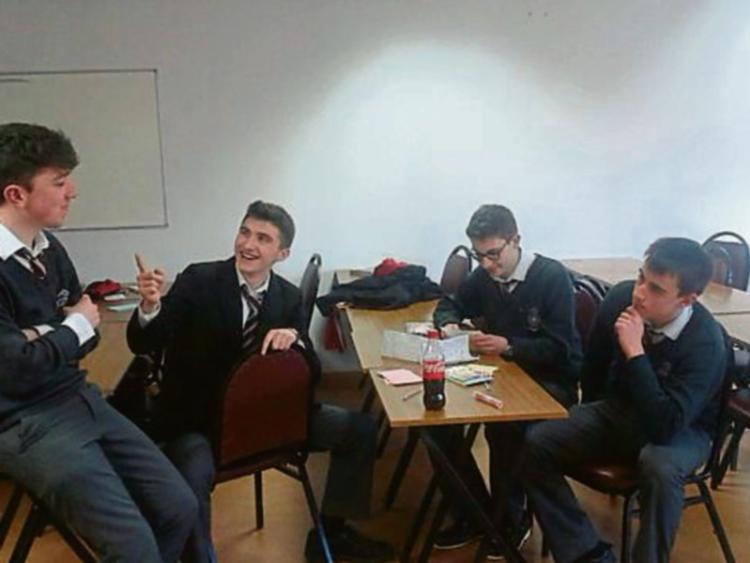 A Kilkenny school debating team will argue for Britain to leave the European Union in what promises to be a mighty semi-final showdown in Dublin tomorrow.

CBS Secondary School, Kilkenny is in the last four out of the 151 schools that took part in the national Concern Debates competition – which was created 32 years ago by Concern Worldwide, Ireland’s largest humanitarian aid agency.

They will be arguing that Britain should leave the European Union against the motion that ‘Britain Should Bremain’ – which promises to be a fascinating and lively spar.

The debates team – which is captain James Foley-Walsh (18) from Clara, Cian Boyle (18) from Ballymacarbly, Co Waterford, Jack Lawlor (18) from Bennettsbridge and Kevin Barrett (18), from Dublin Road Kilkenny – have been practicing their orating skills with mentor and English teacher Gerry O’Brien and with Jaime Martin and Olivia Maher.

The team also have a substitute, Jack Gargan (17) from Loughboy, whose very first debate was when he stepped on the night of the quarter final several weeks ago, in which he was praised for his excellent work.

Proud mentor, Mr O’Brien, said: “This is the furthest we have got in this competition and we would love to win it.

“All the lads are movie enthusiasts and when they travel home on the bus after debating, another debate usually starts.

“The debating becomes more light-hearted, such as, which is better, DC or Marvel comic movies? Who was the most powerful Sith Lord in the Star Wars universe?

“They are very serious about the debates on development issues, and they have learned a huge amount, but also debate lighter issues amongst themselves afterwards, like many people do.

“They enjoy the different stages that go into preparation, researching the topic and contacting professionals for their opinions on a subject.

“The thrill and adrenaline of having it all come together on the night and still yet the unpredictable nature of an evening.

“You never know before how an evening will go - the students have met with a lot of interesting people on their journey to the semi-final.”

The competition - Ireland's largest schools debating competition - was created by Concern Worldwide to encourage further learning and debate about issues of global justice and human development.

Many past participants have gone on to have successful careers, some in politics, like Sinn Fein Senator Kathryn Reilly, and in journalism and broadcasting, like RTE presenter Claire Byrne.

CBS Kilkenny said it has a “proud” history and that they are “dedicated to the provision of a wide array of extra-curricular opportunities for students allowing them to express themselves and achieve their maximum potential on their path to adulthood.”

They will be debating with St Joseph’s Presentation College, Lucan, Dublin at the King’s Inns – Ireland’s oldest school of law founded in 1541 during the reign of Henry VIII and where historical figures like Daniel O’Connell and Theobald Wolfe Tone once orated.

The final will be held at The Helix in Whitehall, Dublin on May 18 and the winner will be invited to see one of Concern’s overseas projects – which saw last year’s winners, De La Salle in Bagenelstown, Co Carlow, travel to Mozambique.

The other semi-final spar coming up is between Athlone Community College, Co. Westmeath and Cross and Passion College, Ballycastle Co. Antrim.

Schools Programme Coordinator with Concern Worldwide, Evanna Craig, said: “We are very proud of all the teams who took part this year – which saw more schools than ever participate.

“We would urge any school or student interested in taking part next year to get in touch with us – there will probably be high demand so we may have to cap the numbers registering for the first time ever.

“The benefits are huge – and time and time again, our debaters tell us how it has inspired and helped them with their career choices by the time they did their leaving certificate exams, and really given them confidence starting out in college.

“And of course for us the hope is that they go on to become life-long advocates of social change around the world.”