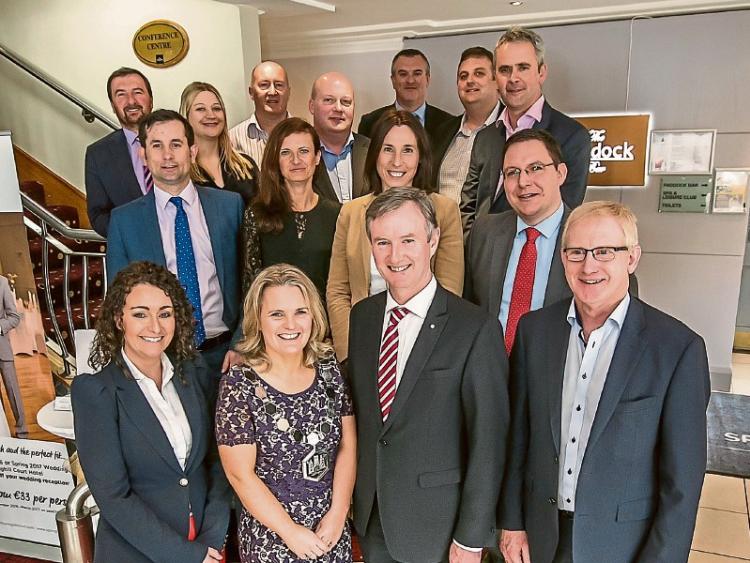 A solid year for Kilkenny Chamber of Commerce was reported at the annual general meeting held at the Springhill Hotel last week.

One of the main functions of the event was the handing over of the chain of the President's office. After two years in the top spot Martin Costello of Murphy Jewellers stepped down for the incoming President to take the position- Deirdre Shine.

Last year, the chamber appointed a new CEO in John Hurley and are now positioned to make further advances that they have prioritised.

He was pleased to announce the launch of the Medieval Mile pass in the coming weeks, a project he had put considerable time in to. Martin also thanked his family and staff at Murphy Jewellers for their support.

Newly appointed President Deirdre Shine, a manager with the Bank of Ireland, thanked Martin for his commitment to the Chamber as President. Deirdre was in the position of Vice President for the last two years prior to appointment.

A Kilkenny native, her parents, Smiths, ran a shop where the Lighthouse once was.

She stressed the importance of jobs for Kilkenny and foreign direct investment for the city and county as a whole.

She also outlined the planned introduction of a 'Junior Chamber' for Kilkenny where young business people can join the Chamber, and avail of local networking and mentoring.

Guest speaker at the event was newly appointed director of the South East Action Plan for Jobs, Sean McKeown.

Mr McKeown outlined the state the South East was in, with over 20% unemployment by 2012.

In recent years that has dropped to a present day figure of 12%, but the plan targets the creation of 25,000 jobs in the region over the next two years. A key driver of this will be tourism.

CEO John Hurley reminded all of the upcoming Golf Classic in Mount Juliet next month, with a large contingent from the British Irish Trade Alliance attending.