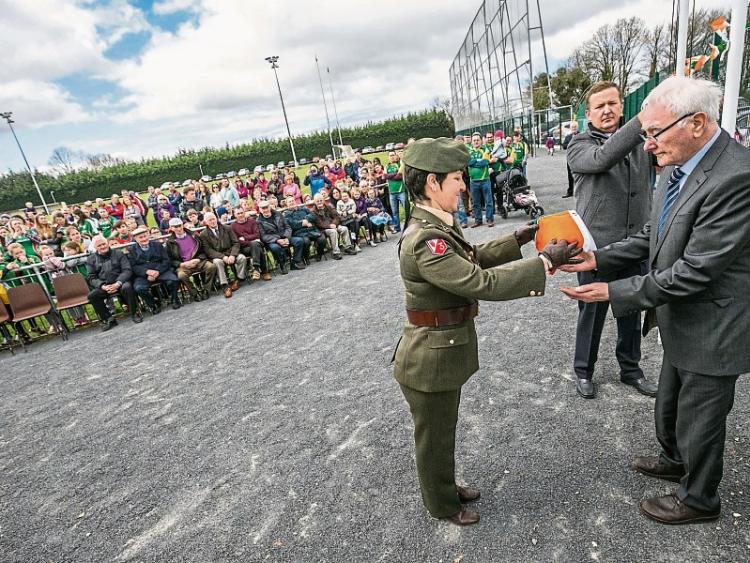 The sun shone on a wonderful community in north Kilkenny on Sunday morning.

Over 250 people turned up for the Muckalee 1916 Commemorations.

A large group made up of local GAA clubs marched from the Old Creamery to the Muckalee GAA Club Grounds.

The march was led by a flag party made up of members of the permanent defence forces and piper Anthony Coy.

Muckalee Football Club Chairman Larry Maher welcomed people to the event and paid tribute to all those both past and present who have made the club a success.

He paid a special thanks to the Hunt family who allowed the club establish itself long before it was in a position to purchase the land on which it is situated.

He spoke of the importance of remembering those men and women who made the ultimate sacrifice to ensure we could live in a free self governing republic was established. He highlighted the importance of the proclamation; the founding document upon which we identify ourselves as a nation and the national flag as being a symbol of peace and reconciliation.

Mary Hally dedicated a piece of poetry for the occasion and the proclamation was read by Brendan Morrisey.

Members of the permanent defence forces presented the tricolour to Martin Morrisey who the raised the flag. A lament was played by piper Anthony Coy.

Fr Martin Ryan blessed the plans for the new club development which will begin during the club's centenary year in 2017.

The ceremonies ended with the playing of the National Anthem and the ladies committee provided tea and sandwiches for the large crowd.