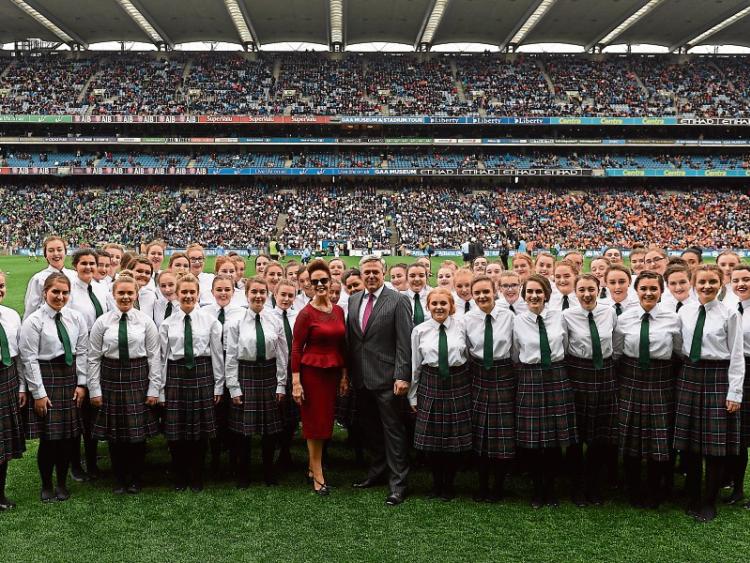 A secret benefactor played an instrumental part in making a dream come true for the local Presentation Secondary School choir.

The girls and their choral director Veronica McCarron stunned judges and viewers with their incredible performance on Britain's Got Talent on Saturday evening. The group' spine-tingling rendition of Adiemus received a unanimous four-out-of-four 'yes' votes from the judges.

By the time they were back on Irish soil, the video on Youtube already had hundreds of thousands of views, but the girls had little time to rest on their laurels. On Sunday, they performed in front of 50,000 people at Croke Park, during half time at the league final.

The local choir, which has won multiple prestigious competitions in recent years, had come to the attention of Britain's Got Talent spotters last year. However, getting more than 60 students, their choral director and others over to the UK for auditions and putting them up is a costly business - around €17,000. For a while, it looked like a pipe dream.

But a local man, under the strict condition of anonymity, made a substantial donation - with the school Board putting up the rest - to ensure the girls could have their opportunity on the big stage. They didn't disappoint.

The competition started with 20,000 acts vying for recognition. After initial rounds, this is pared down to 8,000 acts, which then go before the producers. These are the people who you see standing in line.

It was out of these 8,000 that the final 400 were selected to sing in front of judges. And the Loughboy school's senior choir was one of them.

Principal Shane Hallahan says the choir has always been a source of great pride.

"Now our choir is representing Ireland in what is arguably the biggest talent competition in Britain," he said.

"The girls, their choral director, Veronica McCarron and everyone associated with the choir have all worked extremely hard to get wher we are."

The story began last autumn, when Britain's Got Talent spotters saw a performance by the choir on Youtube.

They got in touch with the school, and prinicpal Shane Hallahan and choral director Veronica McCarron agreed to a visit.

With scarcely a week to prepare, Veronica and the choir dropped everything and set about getting ready. The Britain's Got Talent crew arrived at the school in the first week of November, and they liked what they heard and saw.

"Ray Brophy came and did a wonderful backdrop for us," says Veronica.

"They did the video and brought it back to London. Then, a month later, we heard we got through.”

With a secret donor helping the school board with costs, the group went over to Birmingham and performed for the judges. Veronica says that the identity of the generous individual who helped finance the trip will remain a closely-guarded secret.

The choir's musical backing tracks were all produced and accompanied by the incredible Ollie Hennessy, the musical director at RTE's Rose of Tralee. His team, including Carlow's Aoife Kavanagh (piano, strings, flute) and sound engineer Frank McGinn produced a stunning, seamless piece of work.

"We went over to Birmingham, and Ollie came with us to help behind the scenes," says Veronica.

"It was a great support and relief to me. Then we sang and had a fabulous audition, and we got the four yesses. Two weeks later we were called back again.”

And the good news continued. Soon, they will know what else might be in store.

"Now, we are waiting with bated breath to hear the outcome," says Veronica.

Veronica was demure when asked about the Simon Cowell 'cute' comment about her sunglasses, but said she was nonetheless pleased that it gave the choir's profile an added little boost in catching the public's imagination.

The choral director admits the Kilkenny choir is at a disadvantage as Republic of Ireland viewers cannot vote by phone. However, she says people can encourage their UK friends and relatives to make their voice heard - and the internet will provide another avenue.

"We are in the process of setting up a website that people can vote for us online - if we are lucky enough to advance," she says.

"We will really need all of Ireland to get behind us."

The choir had to cope with losing a number of its senior choristers - sixth years - this year, because of the pressures of the Leaving Cert. Just 10 stayed on.

"But they were so glad they did," she says.

"The others are brand new to the senior choir. Before Britain's Got Talent, they had never sang in anything other than the school Mass."

The choir should know whether they have made it or not by around the middle of May.

"The girls have been extremely hard working and dedicated," says Veronica.

"They are an absolute credit to themselves, their parents, the school, to Kilkenny and to all of Ireland.

“Our principal Shane Hallahan, our deputy principal Mary Ryan, and the entire staff are extremely proud and delighted with the great honour and glory that this has brought the school - and the whole of Kilkenny."