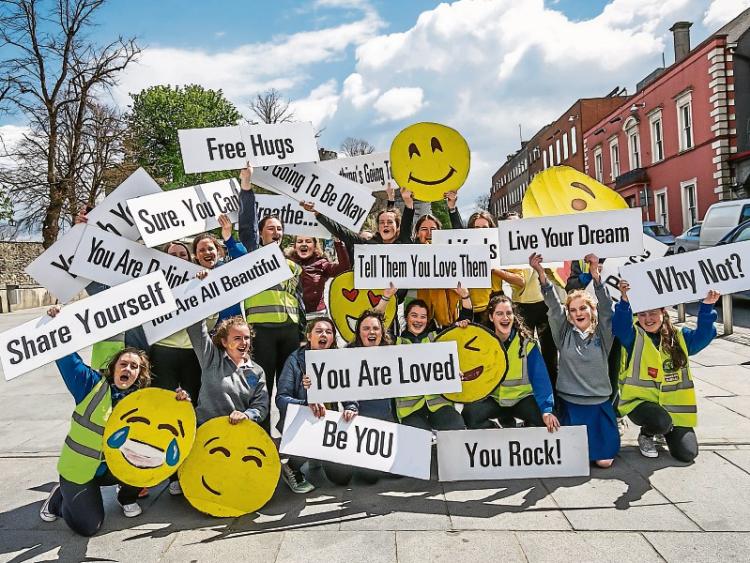 Loreto Secondary School, Kilkenny, last week became the first school in Ireland - and the second in Europe - to take part in a unique event spreading a little joy into people's lives.

'The Happiness Sprinkling Project' began in the USA in May 2012 and quickly spread across the States, and eventually into Canada. Now, it has reached this side of the pond, and a group of Transition Year students in the Loreto took it upon themselves to get involved.

They were out early last Tuesday morning in high-vis jackets, holding large, bright yellow happy faces they had made themselves,as well as signs which bore messages such as 'It's Going to be All Right' and 'Breathe' and 'You are Loved'.

The students were outside the school on the Granges Road before school — from around 8.30am onwards — 'sprinkling happiness', before they then headed down to the Parade around to continue in a busier spot.

The reaction was positive; people waved, smiled, and motorists honked their horns. Several people even came over for a hug and a chat as the morning went on.

Created by Laura Lavigne, founder of the Anacortes Center for Happiness, The Happiness Sprinkling Project has been building momentum over the past three years. 'Happiness Ambassadors' have started popping up in a number of American cities.

Together they are aiming to eventually build a 'Happiness Sprinkling Tribe', whose vision is to expand into inner cities and eventually all over the world.