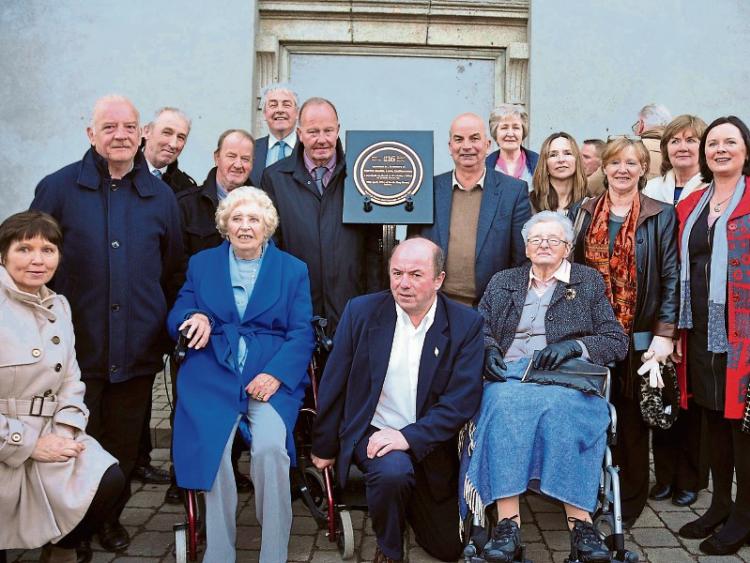 April 29, 2016 will be remembered for the significant occasion that it was simply by “being there” to honour the Centenary Commemoration of Patrick Bealin R.I.P. of Loon, Castlecomer.

Even the members of the Parish Hospitality Committee were taken aback by the huge crowd but such is there versatility the miracle of the loaves and fishes was replicated as all were nourished and fed.

This was yet another chapter in the success story for Kilkenny County Council and the members of the Centenary Committee so competently assisted by Brian Tyrrell and Catherine Cooney.

From the word go “spiritually” Patrick Bealin was all around us commencing with a Con-Celebrated Mass in the Church of the Immaculate Conception where Fr. Sean O’Connor (A grand nephew of Patrick Bealin) was Chief Celebrant.

Gifts were brought to the altar by local Cllrs Maurice Shortall, John Brennan and Mick McCarthy. Adding to the ambience of the unique occasion in song were the Deenside Minstrels ably assisted by Jimmy Byrne. After Mass a poignant wreath laying ceremony took place in the adjoining cemetery.

Wreaths were laid by Cllr. Mary Hilda Cavanagh, Cathaoirleach Kilkenny County Council on behalf of the people of the city and county of Kilkenny, Mrs. Anna Creedon, Chairperson of our Parish Pastoral Council on behalf of Castlecomer Parish, Margaret O’Neill and Dr. Maire Downey on behalf of the members of the local Fassadinin History Society, Peter Boran on behalf of his late mother Annie who visited the grave every Sunday of her life also several extended members of the Bealin family. Out in force were the Flying Column from Kilkenny who provided a guard of honour and also a poignant re-enactment of the killing of Patrick Bealin narrated by Gráinne Quigley.

The march to the Courthouse was led in style first of all by a lone piper Jane Dunne, Killeshin Pipe Band and next on horseback Frank Doyle, Bagenalstown.

Centre piece here was the unveiling of a Memorial Plaque in his honour by the Cathaoirleach of Kilkenny County Council Cllr. Mary Hilda Cavanagh. “People have taken to heart the message of the Centenary Committee Remember ; Reflect ; Reimagine. This is an opportunity to commemorate the past, to reflect on our journey over the last 100 years and to imagine the future of our republic. This evening we remember and reflect on the life and death of Patrick Bealin, known as Paddy, who was tragically killed during the Rising in the violence commonly referred to as “North King Street Massacre”. Paddy’s death was a tragic loss for his family and would have resonated strongly in the closeknit community here in Castlecomer.

Although the Rising was largely confined to Dublin, the death of a local man would have brought the significance of the Rising home to people in this part of the country in a very painful manner.

This plaque will be a permanent reminder of the events of 100 years ago and is a visible means through which this generation and the generations to come will remember Patrick Bealin here in his native place,” said Cllr. Cavanagh.