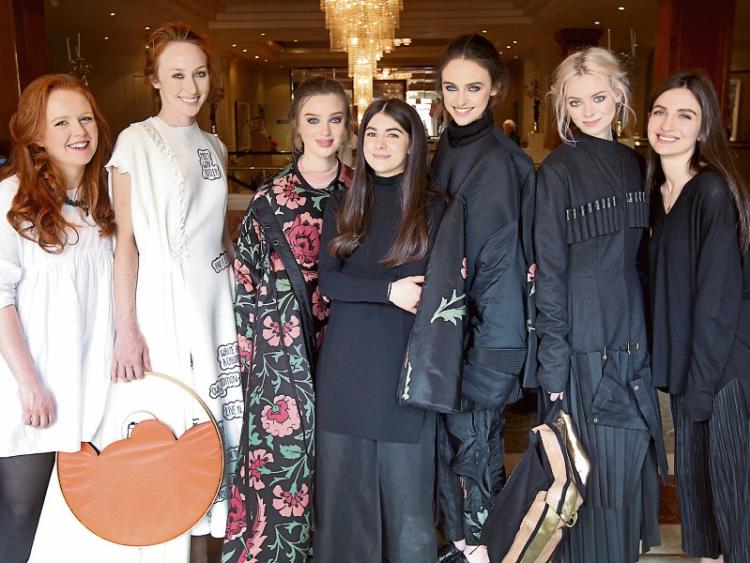 Kilkenny local Ailbhe Griffin was recently named runner up in the National College of Art and Design (NCAD)’s and Brown Thomas’ ‘Designer to Watch’ competition.

The announcement was made at NCAD’s annual Fashion Show which recently took place (10.05.16) in the alternative surroundings of the underground carpark of The Westbury.

The future of Irish fashion design was in the spotlight at this year’s show, which has become the place to be to catch a glimpse of Ireland’s emerging creative talent.

Ailbhe’s collection explores her mental processes and the hope of expressing emotion through clothing. Illustrations are portrayed through print and stitch, exposing thoughts in layers of fabric, with more superficial thoughts on the surface while reflections become barer through the inner layers. These illustrations have been combined with a feminine silhouette with an added dimension of embroidery hoops as a source of framed structure. Stark whites, tonal pinks and bright orange were the chosen colours to depict this feminine mood in a contemporary way. Ailbhe has previously completed an internship with House of Holland.

Speaking at the show, Angela O’Kelly, Head of Design for Body and Environment at NCAD, commented: “NCAD’s annual fashion show has become a staple of Ireland’s design calendar and continues to be a leading fashion event. It is fantastic to see the final products of the knowledge, skills and talent that our Fashion Design graduates have acquired and developed during their time in NCAD, on display at this year’s show.”