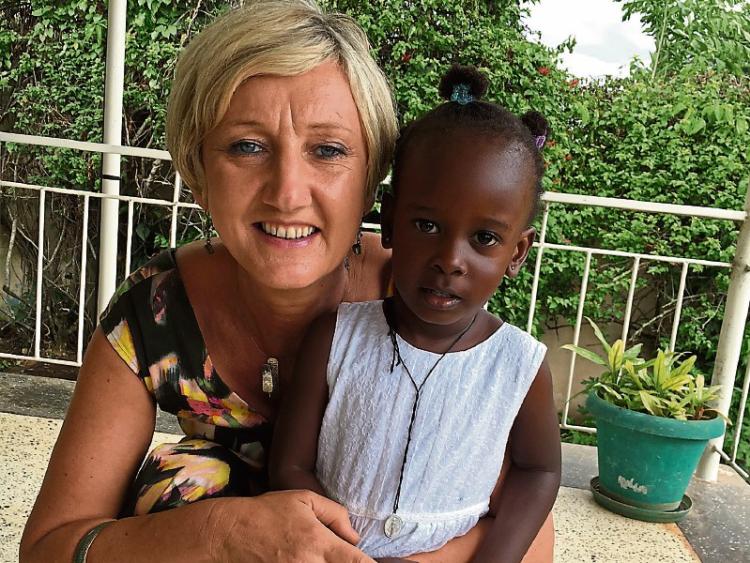 Jovia is lying on a mattress on the ground of her one room house in a slum area of Kampala, the capital of Uganda.

Weak and emaciated she is clearly in her last weeks of life. She has cervical cancer and full blown HIV/AIDS, but despite her illness she smiles as she holds my hand. I find it hard to hold back the tears.

It is early January and I am on one of my first home care visits with Hospice Africa Uganda, a charity whose mission is to bring peace and comfort to people dying from cancer, HIV AIDS and other serious illness.

A journalist and media consultant from Goresbridge, Co. Kilkenny, I have no medical experience whatsoever. So I find the visit really tough.

Jovia is 29 , a single mother of a 14-year-old daughter. At one stage she had a better life. She becomes animated as she tells me she was trained as a cook and before she got ill had regular work. She was first diagnosed with HIV/AIDS and later cancer. Most of her family abandoned her and the father of her daughter Sharon has not been on the scene in a long time.

As with so ill people in Uganda Jovia could not afford health treatment, which is not free. The country has a haphazard, chaotic health system. To walk through the national referral hospital in Kampala is a shocking experience. Patients are queuing up to be treated, lying on grass outdoors in the baking heat and in corridors inside the overcrowded buildings that make up the sprawling campus.

Last month it was announced that Uganda’s only radiotherapy machine is broken beyond repair and it will take at least a year for a replacement. And that is only if the Government honours its commitment to replace it. This means the 17,000 people who receive radiotherapy treatment in this East African country every year have nowhere to turn, unless they have the money to travel abroad for treatment.

Hospice Africa Uganda was alerted to Jovia’s case last year and the care which she received from the dedicated clinical team transformed her situation. The oral liquid morphine they prescribed controlled her pain, and she was made comfortable. Other needs were also looked after. Some money for food. And she received spitirual gudiance also.

I visited Jovia a total of four times since January and learned that she was a bright, intelligent and loving woman. I was able to help her with some amounts of money thanks to the kind donations from people in Ireland who contributed to a fund I started. Her big concern was getting her daughter education after she died. After I posted an appeal on my Facebook page an Irish family came forward to help.

Jovia passed away peacefully at her home on April 27th. It was amazing that given how ill and weak she was that she battled so long. Happily she died comfortably and in a peace. The home care team visited her the day before she passed away and before they left she requested Mango fruit. At that stage she was not able to eat much.

That visit I made to Jovia in January seems like a life time ago now. Since then I have met many other Jovias, desparately poor people with terminal illness who are crying out for help and support.

I initially signed up as a volunteer with Hospice Africa Uganda for one month, to help with communications and fund raising. Almost five months later I find I am still here, drawn to the inspiring work of this incredible charity. The experience has proven life changing.

I often pinch myself that I am acutally here. This was never in my grand plan. At 52 years, with my two chldren reared, this was the last place I expected to be. Yes life takes the most unexpected twists. Things happen that are out of our control.

I first leared about palliative care and the hospice movement in 2013 when I did work with the Irish Hospice Foundation (IHF). And that is how I met the person who I hold responsible for my being here in Africa, .81-year-old Nobel Peace Prize nominee Dr. Anne Merriman.

This inspirational powerhouse of a women is internationally renowned for bringing pallliative care to Africa. Born in Liverpool she joined the Medical Missionaries of Mary in Co. Louth in the 1950’s and went to medical school in UCD and qualified as a doctor.

After spending time working in Nigeria, Britain and Singapore she set up Hospice Africa Uganda in 1993. By this time she had left the MMM order but has maintained her strong faith and misisonary zeal. She has also kept strong links with Ireland. Hospice Africa Ireland supports the work and the Irish people have been very generous over the years.

Hospice Africa Uganda cares for around 1,800 patients a month at its three centres in Uganda – Kampala, Mbarara and Hoima. All of its services are outreach and care is delivered in peoples homes. HAU is also educating doctors and nurses from many other African countries in palliaitve care at the Institute of Hospice and Palliative Care at its headquarters in Kampala. Spreading the knowledge is how Dr. Anne sees palliative care reaching all corners of Africa.

With treatment and cure for cancer and Aids and other serious illness at such a low rate, palliative and end of life care is all important. Oral liquid morphine is key to helping HAU staff provide peace and dignity to desparately ill people in their last weeks and days.

My first few weeks in Uganda were quite a culture shock. All the travel I had done in the past in my job as a journalist, which included two years as Asia correspondent of the Irish Times during which I covered the War against terror in Pakistan and Afghanistan, did not prepare me for Kampala, its dry heat, dusty pot-holed roads and chaotic traffic, the poverty, and the warmth of the people.

Full of Fun and Love

In my first three months I stayed with Dr. Anne whose house is full of fun and love. Happy chaos! She has 10 dogs, 6 cats and her extended family, the three girls who work for her (all unmarried mothers) and their gorgeous kids. I have become godmother to one of them, three-yer-old Pearl.

I have come to truly realise the meaning of palliative care and “hospice”. In Ireland when we hear of hospice we think of a building where people go to die. Here hospice is a philosophy where the sick are cared for loved ones and helped to die in comfort and peace and digniy at home.

After one month I knew I was not ready to come home. I decided to stay until May. And I have now extended further to September. Come then who knows? The pull of Africa is proving very strong.

I do miss home, my kids (aged 24 and 26) and my family including my mother, Kitty in Goresbridge and my four brothers and sisters most who are living in the Kilkenny area.

Note: Since December I have raised €25,000 for HAU. I have set a target to raise another €20,000 before I come home. My online donation account (the money goes directly to Hospice Africa Ireland, a board which fundraises for HAU) is at: https://give.everydayhero.com/ie/miriam-2 Every little helps and thanks for your support.