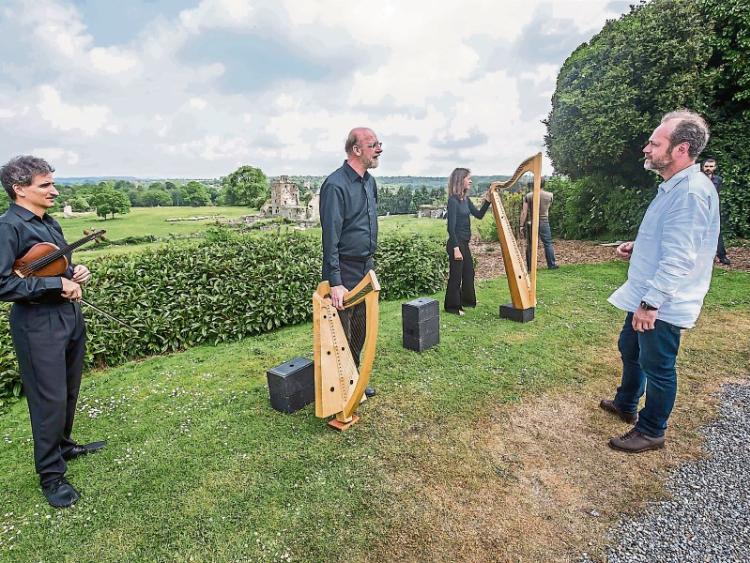 A French film crew shooting a music video for a song aptly titled The High Road to Kilkenny, randomly found Jerpoint Park and fell in love with the location.

Producer Benjamin Belton was looking for both a shoot location and a place to stay when the crew, lost in local countryside, were sent to Marie Fitzgerald's B&B and she recommended Jerpoint Park as the perfect spot.

And when they arrived, Benjamin could not have agreed more.

The song, The High Road to Kilkenny' is the title track on the album from Le Musicians de St Julien', a traditonal Irish music group extremely popular in Europe. They also played some jigs in the Salmon Pool on Wednesday evening last recording videos for other songs on the CD.

“We have filmed the music video in various settings,” said Benjamin, enjoying his first trip to Ireland in the glorious sunshine having soaked in the rays from here to Galway and Leehane.

“But here is typically Irish. Of course you can go to the west and the sea but this to me is a real view of the country, not just the postcards of the west.

“I was just deeply touched by this place,” he added of Jerpoint Park - once a thriving Norman town larger than Kilkenny was five centuries ago, which was mysteriously wiped off the map.

“This place has a real connection with the past. I feel the place is alive and you know, it's important people come here, to remember it, pay tribute to the people who were here and to remember that it did exist, a place like this needs to be remembered,” he added.

With six musicians, and a further crew of seven spending last week in Kilkenny, they will continue shooting the video in areas that offer context to the music, added Benjamin.

As always, the proprietors of Jerpoint Park, Joe and Maeve O'Connell, welcomed the film crew and musicians with open arms.

Jerpoint Park and its story is featuring prominently in Ireland's Ancient East tourism drive and already two film crews have done promotional films of Jerpoint Park, one of which reached an auidence of 40 million viewers.