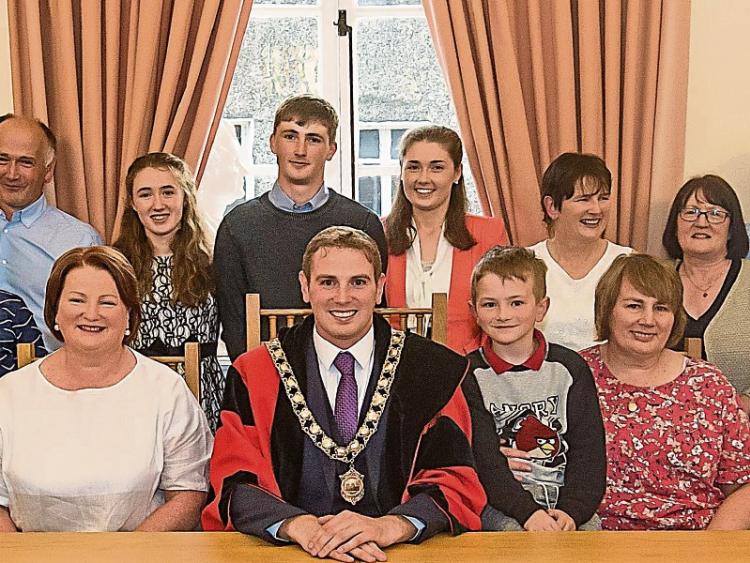 A new Mayor of Kilkenny took the chain of office in City Hall on Monday evening, the Summer Solstice.

Fine Gael councillor Patrick O' Neill, who was first elected to the Kilkenny City East area in the 2014 Local Elections, takes over from Fianna Fail councillor Joe Malone. The 28-year-old, who received the unanimous backing of his colleagues, now becomes one of the youngest-ever mayors here.

Proud family members, friends and supporters packed the visitors' gallery beyond capacity for the AGM of Kilkenny City Municipal District.

Greeting them, outgoing-mayor Joe Malone said it was hard to believe that 12 months had passed since he took office. He spoke of the many proud moments during the year, and thanked everyone for their support.

“I have got to know Patrick since we were both elected for the Kilkenny City East area in 2014, and now as a party colleague and friend, I have no hesitation opputting his name forward,” he said.

“I have seen his ability, committment, and dedication firsthand over thelast two years, and know the challenge of being mayor of our beautiful city will be something he will look forward to and face with energy.”

His proposal was seconded by Cllr Peter 'Chap' Cleere who said he asked that tourism and the brewery site be two areas the new mayor would focus on.

“I am confident he will do an excellent job as mayor,” said the Skeogh councillor.

With no one else proposed, Cllr O' Neill was deemed elected.

“I am truly humbled to be elected to the historic office of Mayor of the City,” he said.

“At 28-years-old, an opportunity like this doesn't come around too often.”

The new mayor thanked his predecessor Joe Malone, saying he had done a fine job.

“I couldn't speak highly enough of the man — even though we are from two different political backgrounds. It will be a hard job to follow.”

Mayor O' Neill thanked his family, friends and colleagues for their support.

Directly addressing the matter of his Bennettsbridge address, he then listed his numerous connections to the city, including family members who had lived or run businesses there.

“My family have been part 0f the city for a long time,” he said.

The new mayor was also lauded by his colleagues for his comments regarding the abolition of Kilkeny Borough Council, which he said was a 'bad idea', and its re-instatement should be looked at.

He said these were exciting times for Kilkenny, noting that the St Francis Abbey site and St Mary's Church projects, as well as the Three Sisters bid, were all at key stages. He set out a number of ambitions for the year, and expressed some concern over future proposals for City Hall.

Finally, the mayor said his aim was to be as inclusive as possible during his term of office, and thanked everyone for putting their faith in him.