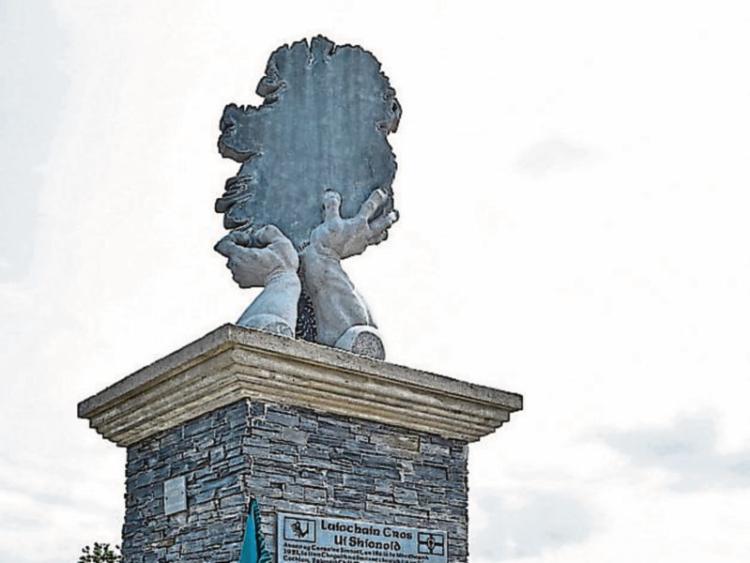 On a gloriously sunny Saturday afternoon, the Sinnott’s Cross Monument was officially unveiled at Tubrid Mooncoin after over 13 years in development in a special, and at times, emotional ceremony.

The monument commemorates all the men and women of the local 9th Kilkenny Battalion who played their part in the fight for Irish Independence. The site of the monument was also the location of a Black and Tan ambush that occurred 95 years to the day and hour of the opening (18th June 1921 at 2.45pm).

The ambush that occurred at Sinnott’s Cross came at a time before the political divides that would split the nation in the years proceeding. On the contrary, it came at a period where the majority of the country were pursuing one goal; that of Irish Independence. As there was martial law in County Kilkenny since January 1921, any activities of this kind would have meant certain death to the participants, and also trauma to the inhabitants of the local area as reprisals, including house burnings, were a sanctioned response by the British Military. So it is very important in this special year of commemoration to remember these brave men and women who sacrificed much so that their descendants could have the life we enjoy today.

The guest of honour on this special day was historian Jim Maher and his wife Mary. The turnout beat all expectations with close to 200 people in attendance, including local Councillors from the Piltown District and local TD John-Paul Phelan. But most important were all the relatives of the 9th Battalion members. Considering there was over 140 men and 20 women from the parish of Mooncoin in the 9th Battalion, there is very few families who can’t claim a relative!

The ceremony opened with an introduction by PRO of the Sinnott’s Cross Committee Eoin Swithin Walsh who reminded all gathered of the significance this period of Irish history, and what the monument represents for current and future generations. There then followed a beautiful instrumental rendition of ‘the Minstrel Boy’ on flute by Ailish Conneely & Seán Gannon and on tin-whistle by Mártín Gannon. The chairman of the Committee, Fintan Dermody then spoke passionately about the journey of the project, from the seed of the idea for a monument to its subsequent fruition. Hilary Óg Delahunty, the secretary of the Committee, spoke as gaeilge and made heartfelt contributions about people who were no longer with us and who had been supportive in the early years of the project such as James Barden, and Hilary Ógs own father Hilary Snr and grandmother Essie Murphy.

Historian Jim Maher then gave a wonderful speech, not only on the history of the Sinnott’s Cross ambush, but also setting this in the context of the War of Independence in County Kilkenny and Ireland as a whole. Jim then officially unveiled the new inscription stone on the monument to huge applause. There then followed a very poignant wreath laying by Ena Delahunty, whose father Martin Murphy took part in the Sinnott’s Cross ambush, and Paul Walsh, whose four uncles also took part in the ambush. There was a moment’s reflection to remember the sacrifices and sufferings of that generation, accompanied once again by music from the three musicians.

Kay Fripps, treasurer of the Sinnott’s Cross Committee, then read a stunning poem she had composed especially for the occasion which encompassed the entire story and emotions of the period in a number of beautifully written verses. The close of the ceremony continued in the same emotive vein with an exceptional rendition of Amhrán na bhFiann by Charlotte Tyler-Walsh as the Tri-Colour was raised to full mast.

Tea (and a few stronger drinks!) were served after the ceremony. Old friends became reacquainted and people reminisced about times past. This was aided by some superb songs by Johnny Dunphy and Paddy Daly on guitars to cap off what was a wonderful and memorable afternoon.

The Committee would like to thank every single person who helped in anyway over the last 13 years, there is just too many names to list here. This monument was created in totality by fundraising, donations and volunteering of time, effort & materials. We would hope that the 1921 generation would be pleased with what this generation has done to remember their anguish and unwavering strength. And we also hope that the Sinnott’s Cross Monument will stand as a reminder to future unborn generations to appreciate the independent democracy these people sacrificed so much to achieve.