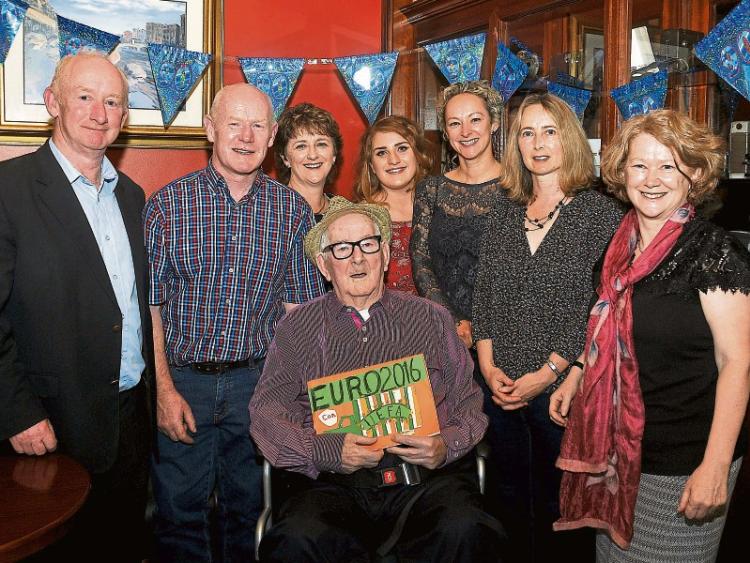 One of the best loved and most inspirational people in Kilkenny celebrated his 90th birthday in style on Saturday.

Hundreds attended the celebration for one of the city's most sons, Con Downey of Talbot's Inch in Dore's Hotel on the Freshford Road.

From former team mates of his own soccer playing days to younger faces whose love for the beautiful game started as children in schoolboys soccer which began fifty years ago this year thanks to Con.

Old work mates from his Mahon and McPhilips days, his many life time friends in the Butts estate were joined by politicians, former volunteers from the Fr. McGrath Centre’s homework club, volunteers from the Sunday Bingo and the many other community and social groups he helped form over his life time.

Kilkenny Schoolboys soccer was started in 1966 by Con, Mike Kelly and Benny Hayes who set about organising a league system for children in Kilkenny. Fifty years on nearly every soccer team in Kilkenny can trace its roots back to then.

Con worked all his life in Mahon and McPhilips where his leadership talents lead him through the ranks to a management position.

But it was for his charitable and social works that Con is most remembered for in Kilkenny and the many thousands of struggling families and children who he helped over his life time.

A founding member of the Sunday Night Bingo in the Neighbourhood Hall on the Butts Green that ran for nearly 20 years and helped raise thousands of pounds for charitable work.

He also helped found a community charitable group in the current Vincent De Paul house on the Butts Green in the late seventies with Sr. Olive, Margaret Crotty and a teenage Stephen Murphy and several local women in the Butts that went on to assist, mainly funded by the Bingo and community fetes.

Con was an organiser of uncountable, community fetes, sports and social outings – all of them fundraisers for that cause closest to his heart – Supporting struggling families with young children in a time in Ireland when there was little welfare support for these families.

But the two projects closest to his heart were the Children’s Christmas Toy Bank run by him and his late, beloved wife Gertie, ran from their home in Talbot’s Inch that saw thousands of children know that Santa cared for all children equally no matter how hard Mam and Dad were finding it at Christmas.

But it was his voluntary work and commitment to children in his role in supporting and recruiting volunteer tutors for the Fr. McGrath Centre’s Homework and Children’s Clubs that may prove to be one of his most important lasting legacies.

His commitment to developing children services and older peoples support services in the Fr. McGrath Centre and parish in his later years was testament to his lifelong commitment to families in the parish and especially the Butts estate, a community he had a lifelong affinity and fondness for and who returned that affection on Saturday.