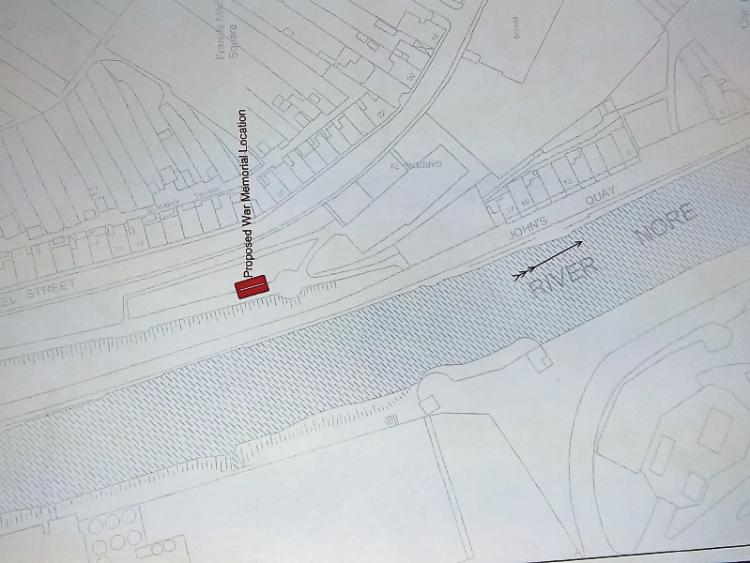 It now looks like Kilkenny's World War I memorial will be located overlooking the river from just off Michael Street, and not in the grounds of St Mary's Church as previously envisioned.

The memorial is to feature the names of the 800 or so Kilkenny men and women who lost their lives in World War I. A public meeting is now to be organised to hear some feedback from locals on the monument.

The new location has found favour with the memorial committee, and has since been approved by city councillors. It's understood there were a number of constraints which rendered the St Mary's Church site unsuitable.

At Monday's meeting of Kilkenny City Municipal District, acting director of services Simon Walton circulated the adjacent preliminary sketch design and the proposed location. He reminded the members that they had agreed to set aside an initial sum of €20,000 to help realise the project.

“I have met the committee over the course of the last two or three weeks, and they are keen to proceed,” Mr Walton told the members.

“I would like to commend the war memorial committee for their commitment and doggedness in pursuing this,” he said, noting that some of the historic differences and issues of the past had been resolved in recent times.

“I think it is a very worthwhile and positive development,” he said.

“The committee have put an awful lot of time and effort into this project,” he said.

“When I heard that this site had been identified, I was extremely pleased. It is in the heart of the city, but in a quiet part of it where people can go for thought and reflection.”

Cllr McKee asked if there was any update on the timeframe and funding for the project. Mr Walton replied that it was likely to cost somewhere between €80,000 — €90,000, putting it below the threshold for necessitating a Part 8 public consultation. However, he said, if the members felt one was necessary, that avenue was nonetheless available to them.

Cllr Malcolm Noonan said it was important not to unnecessarily delay the project by pursuing a Part 8, but that perhaps a public meeting could be organised to gauge local sentiments on the location, as well as issues of design, materials, and finish.

“I do think even a public forum might be a way of informing public opinion, without having to go a formal Part 8,” he said.

Cllr Breda Gardner said she agreed with this and there were no objections. Mr Walton said he would aske the war memorial committee to look at organising a public meeting.