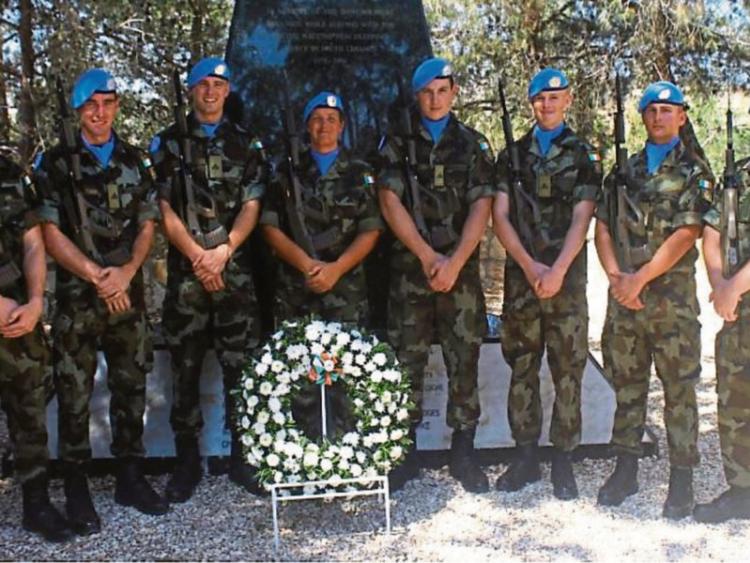 Last Saturday, members of the 53 Infantry Group paid tribute to the 47 deceased members of the Irish Defence Forces who have lost their lives in Lebanon while serving proudly as Peacekeepers with UNIFIL. The ceremony was run to coincide with the National Day of Commemoration, which will be held on July 11 in Ireland.

The soldiers providing the Honour Guard were drawn from members of the 3 Infantry Battalion, James Stephens Barrack Kilkenny. They are currently deployed in South Lebanon with the 53 Infantry Group, and have been in Lebanon approximately seven (7) weeks.

The commemoration ceremony was hosted by Lt Col Stephen Ryan, Commanding Officer of the 53 Infantry Group. Recalling the sacrifice of Irish soldiers in Lebanon, Lt Col Ryan stated “it is right and fitting that we honour our fallen colleges, their sacrifice was not in vain and the current prosperity of Lebanon is testament to their memory”. The guest of honour for the ceremony was the Christian Leader of the Municipal Council in Tibnin, Mr Youssef Kattura. As a long time resident of Tibnin, Mr Kattura recalled the assistance that Irish soldiers gave his community and he was honoured to lay a wreath on behalf of the people of Tibnin. Following the parade Mr Kattura thanked all the members of the Irish Defence Forces for their continued efforts in striving to keep peace in Lebanon and hosted them on a tour of his town, where the Kilkenny troops visited the local Christian Church and the town’s famous Crusader Castle.

Commenting after the event, Kilkenny based Sgt Ruth Comerford said “events like this are a mixture of sadness and pride. We are deeply proud of what we do here; yes, there is a degree of danger, but as professionals we know our job”.

The United Nations Interim Force in Lebanon (UNIFIL) was originally deployed to confirm the Israeli withdrawal from Lebanon. Since 2006, however, the force now monitors the cessation of hostilities, supports the Lebanese Army and assists the civilian population in humanitarian activities. The first Irish Battalion deployed to UNIFIL in 1978 and Irish soldiers have served more or less continuously in Lebanon since then.

The Irish Defence Forces currently have 186 personnel serving with the 53 Infantry Group who are drawn from throughout the Defence Forces, but mainly from Kilkenny. Together with a contingent from Finland and a Platoon of Estonian soldiers (38), they form the 116 FINIRISHBATT based at UNP 2-45 in UNIFIL Sector West. As a former Commanding Officer of James Stephens Barracks, Lt Col Ryan is particularly proud of his soldiers from Kilkenny. “It is a real pleasure to command Kilkenny soldiers here in Lebanon, the professionalism and community spirit they display at home are huge advantages to us here. They are accepted by the local community and are seen as valuable peacekeepers.”

Our troops are engaged in a variety of operational activities close to the border with Israel. They conduct foot and vehicle patrols, observe sensitive areas and interact with the local population. When not on patrol, they have the opportunity to relax and watch the GAA and Euro soccer matches in their canteen. They also receive copies of the Kilkenny people and were featured on Irish TV ‘Kilkenny Matters’ 100th episode.

Pte Robbie Hayes (Kilkenny), who is on his first tour to Lebanon, is enjoying it so far, “the weather is hot and we are going all the time, but it’s great here... it’s what I joined the army for. Of course I miss home, but the lads are fantastic and you get a real sense of achievement here, helping people and bring peace to their lives.”

Mr Kattura accompanied by Lt Col Ryan paused for a minutes silence in memory of those Irish Soldiers who have died in Lebanon.