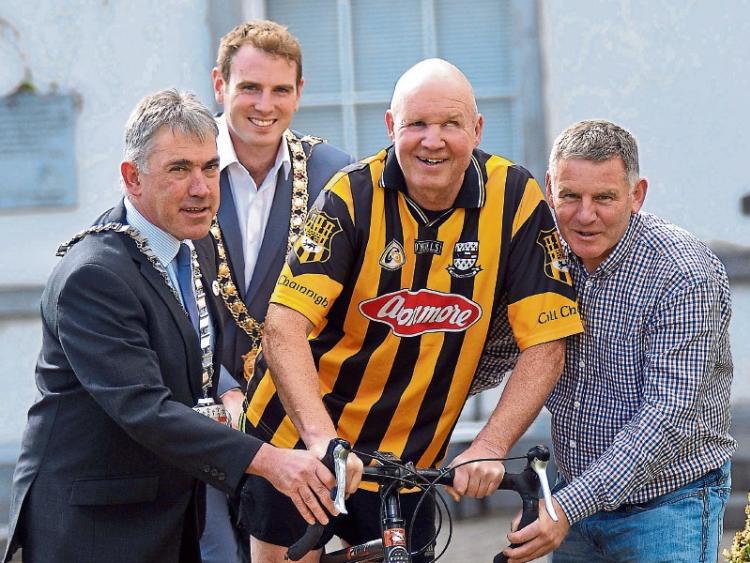 Kilmanagh man Tom Kennedy is about to set off on an epic 2,500km journey on a bicycle made for two.

Starting out from Kinsale this weekend, Tom, who is blind, will travel the Wild Atlantic Way, accompanied on the bike by a succession of friends who will each take the pilot seat for a few days. He's doing it all to raise funds for a local cause — the World War I monument planned for the city.

Tom reckons the journey will take around three weeks, weather depending. He plans on covering between 120km and 150km each day.

Many people in Kilkenny know Tom from the gym, seeing him out pounding the pavements or on the bike. The training has been going well.

“It's all local lads who are doing it with me. Some weeks I would cycle five days out of seven, and it would be a different lad every day. I have five people lined up, and they'll all do a few days. And there's a few more on standby.”

Tom's not into the fancy gels and performance drinks cherished by many fell0w athletes. He says he'll start the day with scrambled eggs and maybe finish it with a pint.

As well as being a personal challenge for him, he is doing his bit to help out with funding for the World War I memorial, which is proposed for the Michael Street area of the city, to honour Kilkenny's Great War dead. There will be just over 800 names on the memorial, and each carved letter costs €1.

Tom and his friends are covering all of their own costs so all monies raised go directly to the memorial fund.

“The council are part-funding it, but the committee needs to raise money as well,” he says.

“I have no direct ancestor killed in the war, but I have a lot of interest in history.”

Tom has been to Flanders, and was recently over at the Somme with some of the committee members. He notes the legacy of the war, and the fact that many people were reluctant to discuss it for many years. His great friend Jim Fitzpatrick, however, did have a relative who fought and died in the war. Jim is an instrumental part of Tom's team.

“My main anchor is Jim Fitzpatrick from Clara,” he says.

“Without his help, I couldn't get this done at all.”

Jim, who recently won a big race over on the Wild Atlantic Way, will finish the final few days with Tom.

People can follow his journey on the Kilkenny Great War Memorial Facebook page, and the Kilkenny People will be keeping in touch with him on his travels as well.

You can help Tom on his journey by donating the cost of a letter or few on the Memorial. Donations can be made online at KK WW1 Memorial Fund- GoFundMe or to committee by contacting kilkennywarmemorial@gmail.com.