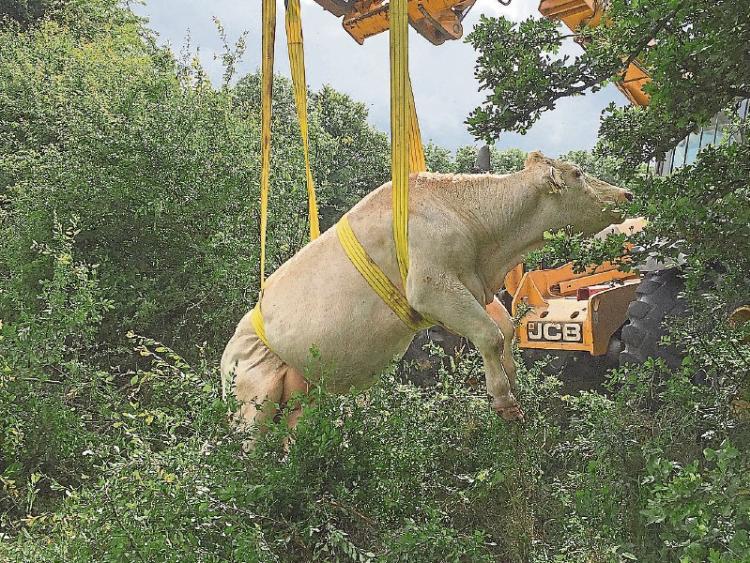 Farming neighbours in Bennettsbridge rushed to help a cow that had fallen into the River Nore on Monday in what turned out to be quite a dramatic rescue.

The cow had previously broken through an electric fence in the field she was in and then fell down a 10 foot bank into the river near Bennettsbridge. It wasn’t until a man out walking on the other side of the river noticed the cow in distress and raised the alarm.

The cow was managing to keep her head above water until some farmers close to the incident rushed to the scene alerting the cow’s owner on the way.

One of the farmers who helped during the rescue was Suzanna Crampton who explained how she was joined by five others at the scene to bring the cow to safety.

Suzanna said: “The cow broke through an electric fence and fell into the river. The banks around the river are 10 foot high.

“A man walking on the other side of the river saw the cow fall in and happened to also see our house on the hill above the field.

“He called up to let me know which was very good of him. I then figured out whose cow it was and called the owner.

“When we got there the cow was in deep water and was trying to keep afloat. We tried walking her up river to a shallow incline but she would only go so far.

“There was heavy vegetation around the animal so we managed to find a spot with no trees and then called another neighbour who had the right machine to reach out over river to pull her up.

“The farmer brought down his telescopic handler to the river and we managed to attach the forks to a belt around the cow and lifted her out of the river.

“There were two vets in attendance during the rescue in case anything went wrong or in case she needed some veterinary attention.

“Thankfully all ended well and the cow was rescued. She was a bit shaken but will recover fully very soon,” said Suzanna.

Suzanna also said there is always a great willingness between farmers to help each other in times of need.

“Farmers are always willing to help each other at a moment’s notice,” she said. “There were six of us all helping during the rescue and we were all glad the cow was safely rescued in the end.

And, if that wasn’t enough drama for the day, just moments later some more cattle broke out of their field nearby onto a busy main road.

“We had to run and help round them up too,” said Suzanna. “It sure was a busy Monday helping round up cattle off roads and out of a river.”